Operation Market Garden from 17–25 September 1944, was an unsuccessful Allied military operation, fought in the Netherlands and Germany in the World War II. It was the largest airborne operation up to that time. Delivering over 34.600 men of the 101st

14.589 troops were landed by glider and 20,011 by parachute. Gliders also brought in 1.736 vehicles and 263 artillery pieces. 3.342 tons of ammunition and other supplies were brought by glider and parachute drop

goal was to force an entry into Germany over the Lower Rhine. He wanted to circumvent the northern end of the Siegfried Line

and this required the operation to seize the bridges across the Maas River and two arms of the Rhine, the Waal and the Lower Rhine as well as several smaller canals and tributaries. Crossing the Lower Rhine would allow the Allies to encircle Germany’s industrial heartland in the Ruhr from the north. It made large-scale use of airborne forces, whose tactical objectives were to secure the bridges and allow a rapid advance by armoured units into Northern Germany.

to seize bridges and other terrain, under tactical command of  1st Airborne Corps under Lieutenant-General Frederick Browning

Several bridges between my hometown of Eindhoven and Nijmegen 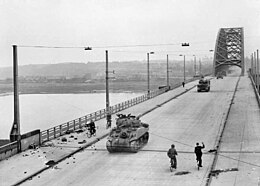 forces were bolstered by the arrival of the II SS Panzer Corps, which consisted of the 9th SS Panzer Division Hohenstaufen

under the high command of SS Obergruppenführer Wilhelm Bittrich.

The Corps had been reduced to approximately 6.000–7.000 men, 20–30% of its original strength in the course of continuous action since late June including in the Falaise pocket In the ensuing battle, only a small British force managed to hold one end of the Arnhem road bridge and after the ground forces failed to relieve them, they were overrun on 21 September. The rest of the division, trapped in a small pocket west of the bridge, had to be evacuated on 25 September. The Allies had failed to cross the Rhine in sufficient force and the river remained a barrier to their advance until offensives at Remagen, Oppenheim, Rees and Wesel in March 1945. The failure of Market Garden ended Allied expectations of finishing the war by Christmas 1944.

was the first German General to be killed in battle in Oosterbeek closeby the Allied drop zone.

Hitler’s teahouse on the Mooslahnerkopf.