in 1922. William Patterson Borland died near Koblenz, Germany, while on a Masonic mission abroad, on 20-02-1919. He was interred in Elmwood Cemetery in Kansas City, Missouri.
Taylor’s rise to the highest echelons of U.S. government began under the tutelage of General Matthew Bunker Ridgway

in the US Army’s 82nd Airborne Division nickname  “All american”

when Ridgway commanded the division in the early part of World War II. Casualties during the European campaign, 1.619 killed in action, 6.560 wounded in action and  332 died of wounds. In 1943, Taylor’s diplomatic and language skills resulted in his secret mission to Rome to coordinate an 82nd  air drop with Italian forces. General Dwight “Ike” Eisenhower

would later say that “the risks he ran were greater than I asked any other agent or emissary to take during the war.” Hundreds of miles behind the front lines of battle, Taylor was forced by rules of engagement to wear his American military uniform, so that if captured he could not be shot as a spy. He met with the new Italian Prime Minister, Marshal Pietro Badaglio

The air drop near Rome to capture the city was called off at the last minute, when Taylor realized that it was too late. German forces were already moving in to cover the intended drop zones. Transport planes were already in the air when Taylor’s message canceled the drop, preventing the suicide mission. These efforts behind enemy lines got Taylor noticed at the highest levels of the Allied command. After the campaigns in the Mediterranean, Taylor was assigned to command the 101st Airborne Division, which was training in England, after the 101st Airborne Division’s first commander Major General William ‘Bill” Lee

suffered a heart attack. Taylor jumped into Normandy on June 6, 1944, with his men. He was the first Allied General to land in France on D-Day. He commanded the 101st Airborne Division

for the rest of the war, among other things during Operation Market Garden in The Netherlands, but missed out leading the division during its most famous conflict, the Battle of Bastogne during the Battle of the Bulge, because he was attending a staff conference in the United States. The Division Artillery commander, Brigadier. General Anthony McAuliffe

exercised command in his absence. Some of the paratroopers resented Taylor for this later. General Taylor called the defense of Bastogne the 101st Airborne Division’s “finest hour” of the war and stated that his absence there was one of his greatest disappointments in World War II. From 1945 to 1949 Taylor was superintendent of West Point. In 1947, he drafted the first official Honor Code publication marking the beginning of the written “Cadet Honor Code”

at West Point. Afterwards he was the commander of allied troops in Berlin from 1949 to 1951. The 101st Airborne Division had the next losses during their campaign in Europe; In Normandy, killed/died of wounds 868, wounded in action 2.303, missing/captured 665. In Holland killed 752, wounded 2.151 and missing 398. In the battle of the Bulge in Belgium, killed 482, wounded 2.449 and missing 527, in total killed 2.043, wounded 2.782 and missed 1590.
More than 40 German divisions were destroyed during the Battle of Normandy. No exact figures are available, but historians estimate that the battle cost the German forces a total of around 450.000 men, of whom 240.000 were killed or wounded. The Allies had achieved this blow at a cost of 209.672 casualties among the ground forces, including 36.976 killed and 19.221 missing. In addition, 16.714 Allied airmen were killed or went missing in direct connection with Operation Overlord.
Maxwell Taylor got his Purple Heart in Holland along the river Rhine dyke, visiting a mortar observation post. Taylor, here with Marlene Dietrich,

ordered to shoot some mortars across the river, but the advise of the soldiers there was no to do so as the Germans answered immediately. Taylor sustained and five minutes later the Germans sent their grenades and Taylor was hit in bottom by a grenade fragment, he screamed “the bastards hit me in the arce” and Taylor was switched off for ten days. The last commander in Europe of the 101st Airborne Division was Brigadier General, Stuart Cutler.

in Berchtesgaden. The 10 Airborne Division was honered 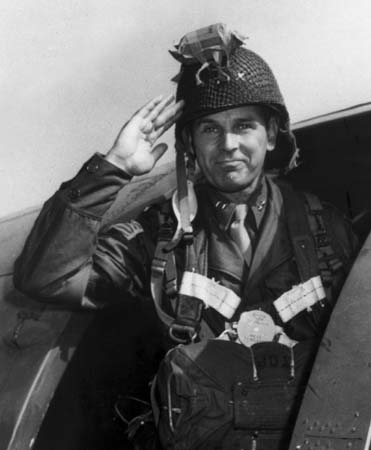 General Taylor died in Washington, D.C. on 19-04-1987, of ALS. He was interred with his wife Lydia, born Happer, who died old age 96, in 1997, at Arlington National Cemetery, Section 7 A. His neighbours are box champ and WW2 technical sergeant, Joe “Barrow” Louis,

The 7th Armored Division was 172 days in combat and had 5.799 casualties, on the European Theather. During its service during World War II, the division captured and destroyed a disproportionate number of enemy vehicles and took more than 100.000 prisoners.