The Bedford Boys, Compagny A of the 29th Infantry Division.

Like eleven other Virginia communities, Bedford provided a company of soldiers (Company A) to the 29th Infantry Division, nickname “Blue and Gray”

was activated on 03-02-1941. Some thirty Bedford soldiers were still in that company on D-Day; several more from Bedford were in other D-Day companies, including one who, two years earlier, had been reassigned from the 116th  Infantry, under then colonel, later General, Charles Draper William Canham (see Canham), to the First Infantry Division, under General Clarence Ralph Huebner. Thus he had already landed in both Northern Africa and Sicily before coming ashore on D-Day at Omaha Beach with the Big Red One.

Company A of the 116th Infantry assaulted Omaha Beach as part of the First Division’s Task Force O. 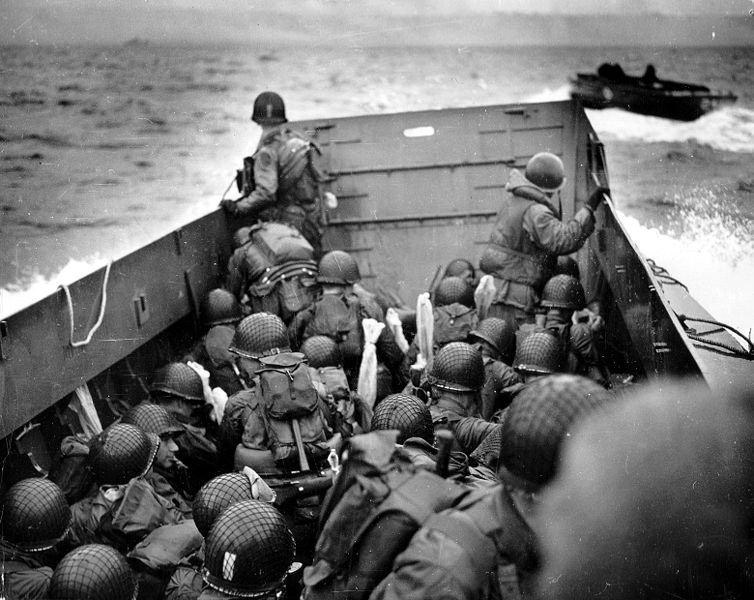 By day’s end, nineteen of the company’s Bedford soldiers were dead. Two more Bedford soldiers died later in the Normandy campaign, as did yet another two assigned to other 116th Infantry companies. Within fifteen minutes all of the officers and most of the NCOs of Company A were killed or wounded with one exception, and the rest of the company suffered over 60% casualties. Bedford’s population in 1944 was about 3.200. Proportionally this community suffered the nation’s severest D-Day losses. Total casualties of the 1st Division during their European campaign, 4.411 killed in action, 17.201 wounded in action and 1.056 missing or died of wounds. The 29th Infantry Division under D-day General, Charles Hunter Gerhardt (see Gerhardt) suffered 3.720 killed in action, 15.403 wounded in action, 462 missing in action, 526 prisoners of war, and 8.665 non-combat casualties, for a total of 28.776 casualties during 242 days of combat.

1. A lie by “Dickie” Abbott Jr. and his family on his enlistment application turned a 17-year-old-boy into an 18-year-old man.

2. Wallace Carter, 21, barely was 18 when he entered the war. The young man shot pool and played dice, the latter of which led to the christening of his nickname, “Snake Junior,” by friends who knew his older brother Allen, called “Snake Eyes,” also a regular at dice games.

3. Clifton Lee, 26, went to work at Hampton Mills after graduating from Bedford County High School. Fellow Company A soldier Roy Stevens remembered him as gentle and shy, friendly and well-liked.

4. When Frank Draper Jr. was a child, he collected coal that fell off the railroad cars running near his home to keep his family warm.

5. Taylor Fellers, 29, worked as a highway bridge construction foreman for the Virginia Highway Department and was a role model for his siblings.

6.  Nicholas Gillaspie wrote home frequently. He sent letters and postcards not only to his family but neighbors, too.

7. Bedford Hoback, 30, was the oldest boy in a family that included his younger brother, Raymond, who also died on D-Day.

8. Raymond Hoback, 24, was offered a discharge because of severe nosebleeds, his sister Lucille Boggess told The News & Advance in 2001.

9. Clifton Lee, 26, went to work at Hampton Mills after graduating from Bedford County High School. Fellow Company A soldier Roy Stevens remembered him as gentle and shy, friendly and well-liked.

10. Earl Parker, after being shipped out for training — but before Company A left the country — Earl Parker did everything he could to get home to see his wife.

11. One of Weldon Anthony “Tony” Rosazza’s favorite hobbies growing up in Bedford was to hitchhike with his buddy Morris Scott.

12. John “Jack” Reynolds, 22, grew up on a farm in a family of eight children, the last of whom was born a year after he died in Normandy.

13. When John Schenk, 27, left for the Army, he and his new wife, Ivylyn, agreed to think of each other at the same time each day.

14. The last time Ray Stevens saw his twin brother, Roy, he reached out his hand to say goodbye.

15. John Wilkes, 24, met his wife, Bettie, at a football game at New London Academy where she went to school.

16. Gordon “Henry” White, 23, returned every day from classes at New London, changed into working clothes and stuffed apples in his pockets to snack on during an afternoon working on the family’s dairy farm.

17. Elmere Wright, 28, was a standout pitcher at Bedford High School and also a tackle on the football team.