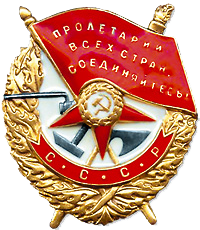 was a Soviet General. The Rokossowski family was a Polish noble family that produced many cavalrymen. His noble ancestry was concealed in the Soviet Union. It was emphasized that Konstantin’s father was a railway worker in Russia. Rokossovsky’s mother was ethnically Russian. Konstantin served in the imperial army as a noncommissioned officer in World War I. He served in the Civil War,

rising through the ranks to various  During the Russian Civil War he became a commander. During campaigns against Admiral Aleksandr Kolchak’s

White Army, Rokossovsky was awarded the highest military decoration, the Order of the Red Banner.Admiral Aleksandr Kolchak, age 45, was sentenced to death along with his Prime Minister, Viktor Pepelyayev.

, age 35. Both prisoners were brought before a firing squad in the early morning of 07-02-1920. According to eyewitnesses, Kolchak was entirely calm and unafraid, “like an Englishman.” The Admiral asked the commander of the firing squad, “Would you be so good as to get a message sent to my wife in Paris to say that I bless my son?” The commander responded, “I’ll see what can be done, if I don’t forget about it.”

In 1922 Rokkosovski took part in the Polish-Soviet war. Far Eastern commands, notably leading a cavalry brigade during the Soviet-Chinese dispute over control of the Chinese Eastern Railway (1929).

Rokossovski retained supreme command until 1937, when he was accused of “connections with foreign intelligence” during Joseph Stalin’s

Great Purge, in which his Polish ancestry played a major role. The NKVD

had arrested Rokossovski on charges of espionage for Poland. He was beaten by interrogators. He was brought to a special court-martial and there he was told that the proof of his guilt was Adolf Yushkevich’s

– “Can the dead give evidence?” Rokossovski asked.- “What do you mean?”- “Well, Adolf Kazimirovich was killed in 1920 in Perekop”, replied Rokossovsky. He told the interrogator that he was serving with him but forgot to mention his death.This apparently saved Rokossovski’s life, but he was sentenced to serve in a labor camp, where he remained until March 1940. During this period he sustained a number of injuries due to the beatings in prison. Then he was released without explanation. Rokossovsky’s first command was in Sochi on the Black Sea coast. After a short conversation with Stalin, he was given the rank of a Corps commander in Kiev.

In World War II he distinguished himself at Moscow, Stalingrad, later Volgograd, and Kursk and became commander on the central front. He won his greatest renown at Stalingrad when he directed six Soviet armies of the Don River front that, along with other Soviet forces, first trapped and then annihilated the 22 divisions of the German Sixth Army

His armies stood by without aiding the tragic Warsaw uprising of 1944 against the Germans.

In a famous incident during the preparation of Operation Bagration, Rokossovsky disagreed with Stalin. Stalin called for an attack on one center of gravity, while en Rokossovski wanted to attack in two sectors. Stalin ordered Rokossovski to withdraw and think about it. This was repeated three times, but each time the commander returned he gave the same answer: “two fronts Comrade Stalin, two fronts.” After the third time, Stalin fell silent, walked over to Rokossovsky and put a hand on his shoulder. The entire room had expected Stalin to degrade Rokossovski by pulling the epaulet off his shoulder, but instead Stalin said, “Your trust speaks for your correct judgment,” and ordered the attack to be carried out according to Rokossovski’s plan. . The battle was successful and Rokossovsky’s reputation was assured. Few dared to contradict Stalin, and given Rokossovsky’s past, this incident was remarkable and his actions extremely courageous.

In 1949, Rokossovsky was made commander in chief and minister of defense of Poland and from 1952 he was deputy prime minister; in this capacity he was an important symbol of Soviet influence in Poland. After the assertion of Polish nationalism under Gomułka as leader of the Polish Communist party in 1956, Rokossovsky resigned and was recalled to the Soviet Union. From 1956 to 1958 he twice served as Russian deputy minister of defence.