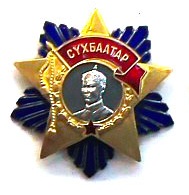 into a poverty-stricken peasant family. His father Konstantin, who had been orphaned at age two and then adopted by Anuska Zhukova, was a cobbler. His mother Ustin’ya was a peasant laborer. Zhukov was said to resemble his mother, and he believed he inherited his physical strength from her; Ustin’ya was reportedly able to accomplish demanding tasks such as carrying 200-pound sacks of grain over long distances. In an era when most members of Russia’s poor and working classes completed only two years of schooling, Zhukov completed the three year primary education course at his hometown school. He was then apprenticed to his mother’s brother Mikhail as a furrier in Moscow and in 1915 was conscripted into the army of the Russian Empire

, where he served first in the 106th Reserve Cavalry Regiment, then the 10th Dragoon Novgorod Regiment

. During World War I, Zhukov was awarded the Cross of St. George

twice and promoted to the rank of non-commissioned officer for his bravery in battle. He joined the Bolshevik Party

after the October Revolution, and his background of poverty became an asset.

After recovering from typhus he fought in the Russian Civil War from 1918 to 1921, at one time within the 1st Cavalry Army. He received the Order of the Red Banner

for subduing the Tambov rebellion in 1921. By 1923 Zhukov was commander of a regiment and in 1930 of a division. He was a keen proponent of the new theory of armoured warfare and was noted for his detailed planning, tough discipline and strictness, and a “never give up” attitude. He survived Josef Stalin‘s

Great Purge of the Red Army command in 1937–39. Promoted to full General in 1940, Zhukov was briefly (January–July 1941) Chief of the Red Army’s General Staff before a disagreement with Stalin led to him being replaced by Marshal Boris Shaposhnikov,

Coincidentally, this led to a relative non-accountability of Zhukov’s military role in the huge territorial losses during the German 1941 invasion of the Soviet Union thus ensuring his presence “in the wings” for Stalingrad. The question of how much he could have done had he held command earlier is still much discussed. On 10-09-1941 Zhukov was made the commander of the Leningrad Front. There he oversaw the defence of Leningrad

. On 06-10-1941 Zhukov was appointed the representative of Stavka for Reserve Front and Western Front. On 10-10-1941 those fronts were merged into the Western Front under command of Zhukov, here with General Ivan Konev

Under his command this front participated in the Battle of Moscow and several Battles of Rzhev. In late August 1942 Zhukov was made Deputy Commander-in-Chief and sent to the southwestern front to take charge of the defence of Stalingrad. Later he and Marshal Eleksandr Vasilevsky

planned the Stalingrad counteroffensive. In November Zhukov was sent to coordinate the Western Front and the Kalinin Front during Operation Mars.

Marshal Zhukov reading the German capitulation. Seated on his right is Air Chief Marshal Arthur Tedder, he died 03-06-1967, age 76.  In January 1943 Zhukov, together with Kliment Vorosjilo,

coordinated the actions of Leningrad Front, Volkhov Front and Baltic Fleet in Operation Iskra. On 16 November he became commander of 1st Belorussian Front and commanded it during Vistula–Oder Offensive and Battle of Berlin. He called on his troops to, ”Remember our brothers and sisters, our mothers and fathers, our wives and children tortured to death by Germans….We shall exact a brutal revenge for everything.” In a reprise of similar atrocities committed by German soldiers against Russian civilians in the eastward advance into Soviet territory during Operation Barbarossa

, the westward march by Soviet forces was marked by brutality towards German civilians, which included looting, burning and rape. Zhukov was present while German officials in Berlin signed an Instrument of Surrender.

After the fall of Germany, Zhukov became the first commander of the Soviet occupation zone in Germany. As the most prominent Soviet military commander of the Second World War, he inspected the Victory Parade in Red Square in Moscow in 1945, mounted on a white stallion. American General Dwight “Ike” Eisenhower,

the supreme Allied commander in the West, was a great admirer of Zhukov and the two toured the Soviet Union together in the immediate aftermath of the victory over Germany.

Zhukov had begun writing his memoirs, Memories and Recollections,

in 1958. He now worked intensively on them, which together with steadily deteriorating health, served to worsen his heart disease. In December 1967, Zhukov had a serious stroke. He was hospitalised until June 1968, and continued to receive medical and rehabilitative treatment at home under the care of his second wife, Galina Semyonova, a former officer in the Medical Corps.The stroke left him paralysed on his left side, his speech became slurred and he could only walk with assistance

Zhukov remained a popular figure in the Soviet Union until his unexpected death, after another stroke, on 18-06-1974, age 77,

although by his own admission he was much better dealing with military matters than with politics.

and they had two daughters, Maria

and Ella. His second wife was Galina Semyonova.

Contrary to Zhukov’s last will for an Orthodox Christian burial, and despite the requests of the family to the country’s top leadership. his body was cremated and his ashes were buried at the Kremlin Wall Necropolis alongside fellow Generals and Marshals of the Soviet Union.Zhukov and next to Stalin.