Leader of Russia during WWII.

the man who turned the Soviet Union from a backward country into a world superpower at unimaginable human cost. Stalin was born into a dysfunctional family in a poor village in Georgia. Joseph Stalin’s father, Vissarion Dzhugashvili,

known as Basu, was a shoemaker. An alcoholic, he spent much of his time in Tiflis (now Tbilisi, the Georgian capital, 50 miles east of Gori) producing shoes for the Russian army. On his drunken and increasingly rare appearances at home, he would beat his wife and son Stalin’s mother,

Ekaterina, or ‘Keke’, also meted out punishment on her son but generally was protective of her ‘Soso’ (Georgian for ‘Little Joey’), especially on account that her first two children, both boys, had died in infancy. Stalin

only learnt to speak Russian when aged about nine but never lost his strong Georgian accent. Permanently scarred from a childhood bout with smallpox and having a mildly deformed arm, Stalin always felt unfairly treated by life, and thus developed a strong, romanticized desire for greatness and respect, combined with a shrewd streak of calculating cold-heartedness towards those who had maligned him.  He always felt a sense of inferiority before educated intellectuals, and particularly distrusted them. Sent by his mother to the seminary in Tiflis, the capital of Georgia, to study to become a priest, the young Stalin never completed his education, and was instead soon completely drawn into the city’s active revolutionary circles. Never a fiery intellectual polemicist or orator like Lenin or Trotsky, Stalin

specialized in the humdrum nuts and bolts of revolutionary activity, risking arrest every day by helping organize workers, distributing illegal literature, and robbing trains to support the cause, while Lenin and his bookish friends lived safely abroad and wrote clever articles about the plight of the Russian working class. Although Lenin, he died age 54, on 21-02-1924, 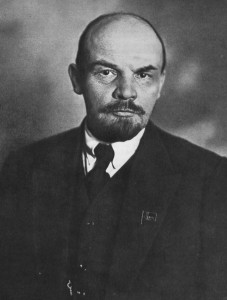 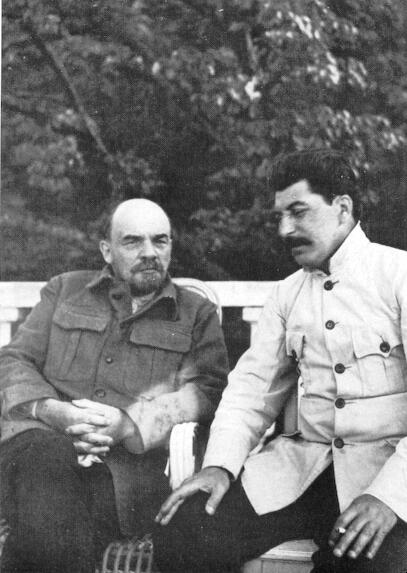 found Stalin’s boorishness offensive at times, he valued his loyalty, and appointed him after the Revolution to various low-priority leadership positions in the new Soviet government. After Lenin’s death in 1924, Stalin

methodically went about destroying all the old leaders of the Party, taking advantage of their weakness for standing on arcane intellectual principle to simply divide and conquer them. At first, these people were removed from their posts and exiled abroad. Later, when he realized that their sharp tongues and pens were still capable of inveighing against him even from far away, Stalin switched tactics, culminating in a vast reign of terror and spectacular show trials in the 1930s during which the founding fathers of the Soviet Union were one by one unmasked as “enemies of the people” who had supposedly always been in the employ of Capitalist intelligence services and summarily shot. The particularly pesky Leon Trotsky,he died age 60, on 21-08-1940,

who continued to badger Stalin from Mexico City after his exile in 1929, had to be silenced once and for all with an ice pick in 1940. The purges, or “repressions” as they are known in Russia, extended far beyond the Party elite, reaching down into every local Party cell and nearly all of the intellectual professions, since anyone with a higher education was suspected of being a potential counterrevolutionary. This depleted the Soviet Union of its brainpower, and left Stalin as the sole intellectual force in the country–an expert on virtually every human endeavour. Driven by his own sense of inferiority, which he projected onto his country as a whole, Stalin pursued an economic policy of mobilizing the entire country to achieve the goal of rapid industrialization, so that it could stand shoulder-to-shoulder with the Capitalist powers. To this end, he forcefully collectivized agriculture (one of the Bolsheviks’ key policy stances in 1917 was to give the land to the peasants; collectivization took it back from them and effectively reduced them to the status of serfs again), instituted the Five-Year Plans to coordinate all investment and production in the country, and undertook a massive program of building heavy industry. Although the Soviet Union boasted that its economy was booming while the Capitalist world was experiencing the Great Depression, and its industrialization drive did succeed in rapidly creating an industrial infrastructure where there once had been none, the fact is that all this was done at exorbitant cost in human lives. Measures such as the violent expropriation of the harvest by the government, the forced resettlement and murder of the most successful peasants as counterrevolutionary elements, and the discovery of a source of cheap labour through the arrest of millions of innocent citizens led to countless millions of deaths from the worst man-made famine in human history and in the camps of the Gulag. As war clouds were gathering on the horizon in 1939, Stalin felt that he had scored a coup by striking a non-aggression pact with Hitler

, in which they agreed to divide up Poland and then leave each other alone. Stalin so strongly believed that he and Hitler had an understanding that he refused to listen to his military advisors’ warnings in 1941 that the Wehrmacht was massing for an attack, and purged any one who dared utter such blasphemy. As a result, when the attack came, the Soviet army was completely unprepared and suffered horrible defeats, while Stalin spent the first several days after the attack holed up in his office in shock. Because the military had been purged of its best minds in the mid-1930s, it took some time, and many lives, before the Soviets were able to regroup and make a credible defence. By then, all of the Ukraine and Belarus were in German hands, Leningrad had been surrounded and besieged, and Nazi artillery was entrenched only a few miles from the Kremlin. After heroic efforts on the part of the whole country, the tide eventually turned at Stalingrad in 1943, and soon the victorious Red Army was liberating the countries of Eastern Europe–before the Americans had even begun to pose a serious challenge to Adolf Hitler from the west with the D-Day invasion. During the Teheran, Yalta, and Potsdam Conferences, Stalin proved a worthy negotiator with the likes of Franklin Delano Roosevelt and Winston Churchill

, and managed to arrange for the countries of Eastern Europe, which had been liberated by the Red Army to remain in the Soviet sphere of influence, as well as securing three seats for his country in the newly formed UN. The Soviet Union was now a recognized world superpower, with its own permanent seat on the Security Council, and the respect that Stalin had craved all his life. Still, he was not finished. Returning soldiers and refugees were arrested and either shot or sent to the labour camps as traitors. Even his own son Yakov was condemned by Stalin Yakov Iosifovich Dzhugashvili, born 18-03-1907 – 14 April 1943) was one of Stalin’s three children,

Stalin married Ekaterina in 1906, but she died already, age 22, on 05-12-1907. Stalin would later state that, other than his mother, she may have been the only person he truly loved. At her funeral, he said, “This creature softened my heart of stone. She died and with her died my last warm feelings for huma and left him a son Yakov. He served in the Red Army during the war, Yakov served as an artillery officer in the Red Army and was captured on 16-07-1941 in the early stages of the German invasion of USSR at the Battle of Smolensk. The Germans later offered to exchange Yakov for Friedrich Paulus “Der Lord“

the German Field Marshal captured by the Soviets after the Battle  of Stalingrad, but Stalin turned the offer down, allegedly saying, “I will not trade a Marshal for a Lieutenant.” According to some sources, there was another proposition as well, that Hitler wanted to exchange Yakov for Hitler’s nephew Leo Raubal

this proposition was not accepted either. Released by the Soviets on 28-09-1955, and returned to Austria. He lived and worked in Linz as a teacher. He died during a vacation in Spain. He was buried on 07-09-1977 in Linz. While there has been dispute over the circumstances of Yakov’s death, historians currently believe that he was killed in a German camp age 36, on 14-04-1943. Stalin’s daughter, Svetlana, wrote in her memoirs that her father believed his son deliberately surrendered to the Germans after being encouraged to do so by his wife. Stalin, she wrote, had Yulia imprisoned and interrogated as a result. Entire nationalities that had been deported during the War, also as traitors, were not allowed to return to their homes, and in 1953, a plot to kill Stalin was ostensibly uncovered in the Kremlin itself. A new purge seemed imminent, and was cut short only by Stalin’s death. He remained a hero to his people until  Nikita Khruschev’s

well-known “secret” speech to a Party Congress in 1956, in which Stalin’s excesses, at least as far as power grabbing in the Party itself, were denounced. Stalin’s health deteriorated towards the end of World War II. He suffered from atherosclerosis as a result of heavy smoking, a mild stroke around the time of the Victory Parade (May 1945), and a severe heart attack in October 1945.

The last three days of Stalin’s life have been described in detail, first in the official Soviet announcements in Pravda, and then in a complete English translation which followed shortly thereafter in the Current Digest of the Soviet Press. As described by Dmitri Volkogonov

a Soviet/Russian historian and Colonel General who was head of the Soviet military’s psychological warfare department, on 28-02-1953, Stalin and a small number of his inner circle, consisting of Malenkov,

and a few others gathered together for an evening of entertainment and imbibing alcoholic beverages. The guests dispersed at approximately 4:00 a.m. on March 1 and Stalin retired to his private quarters with strict instructions that he was not to be disturbed until sounds were heard indicating that he had awakened. Time passed and no sounds were heard throughout the day. At approximately 11:00 p.m. on March 1 his housekeeper cautiously entered his room and found him lying on the floor, wearing his pajama trousers and a shirt. He was unconscious, breathing heavily, incontinent, and unresponsive to attempts to rouse him. Beria was called and, upon seeing him, discounted the fact that he was unconscious, attributing this to alcohol consumption, and departed.

At 7:00 a.m.on March 2, Beria and a group of medical experts were summoned to examine him. Based on their examination, which revealed a blood pressure of 190/110 and a right-sided hemiplegia, they concluded that Stalin, who had a known history of uncontrolled hypertension, had sustained a hemorrhagic stroke involving the left middle cerebral artery. Over the next two days he received a variety of treatments; and, in an attempt to decrease his blood pressure, which had risen to 210/120, two separate applications of eight leeches each were applied to his neck and face over the next two days. However, his condition continued to deteriorate and he died at 9:50 p.m. on 05-03-1953.

His body then was taken to an unspecified location and an autopsy was performed, after which it was embalmed for public viewing.