The V-1 flying bomb (German: Vergeltungswaffe 1,), also known to the Allies as the buzz bomb, or doodlebug, and in Germany as Kirschkern (cherrystone) or Maikäfer (maybug)—was an early pulsejet-powered predecessor of the cruise missile or unmanned aerial vehicle (UAV).

The V-1 was developed by the Werher von Braun (see von Braun) and Walter Dornberger (see Dornberger) group at Peenemünde Army Research Center by the Nazi German Luftwaffe during the Second World War.

During initial development it was known by the codename “Cherry Stone”. The first of the so-called Vergeltungswaffen series designed for terror bombing of London, the V-1 was fired from launch facilities along the French, Pas-de-Calais and Dutch coasts. The V1 carried one ton of high explosives and travelled at damn near 500mph. It had a maximum flying distance of 200 miles but weather could decrease this. A pre-set magnetic compass and gyroscope auto-pilot determined and maintained its course. A smaller propeller at the front of the weapon registered the distance covered. 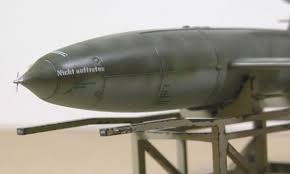 The first V-1 was launched at London on 13 June 1944), one week after (and prompted by) the successful Allied landing in Europe. At its peak, more than one hundred V-1s a day were fired at south-east England, 9.521 in total, decreasing in number as sites were overrun until October 1944, when the last V-1 site in range of Britain was overrun by Allied forces. After this, the V-1s were directed at the port of Antwerp and other targets in Belgium, with 2.448 V-1s being launched. The attacks stopped when the last launch site was overrun on 29 March 1945.

as part of Operation Crossbow, while the launch sites and underground V-1 storage depots were targets of strategic bombing. Between 8,000 and 9,000 V1’s were launched against Southern England, primarily London. After the initial shock of the first ones, their impact was limited as V1’s could be shot out of the sky by anti-aircraft fire as these guns could lock onto the trajectory of the incoming V1. The Royal Observer Corps gave an early warning of incoming V1’s. Fighter planes were also used to tip over the ‘wings’ of the V1 so that it continued to fly but off course. Over 50% of the V1’s fired at Britain were destroyed before they crashed to the ground and exploded. About 1000 V2’s were fired at Britain before their launch sites were overrun by the advancing Allies. In total they killed or wounded about 115.000 people.

The Story of Hitler’s Illnesses.