Towards the end of World War II in 1944, Allied forces advanced from the west, while forces of the Soviet Union advanced from the east. Trapped in the middle, the SS – not wanting the world to know about the Holocaust – decided to abandon the Nazi concentration camps, moving or destroying evidence of the atrocities they had committed there. Thousands of prisoners were killed in the camps before the marches commenced. These executions were deemed crimes against humanity during the Nuremberg trials.

Although most of the prisoners were already very weak or ill after enduring the routine violence, overwork, and starvation of concentration camp or prison camp life, they were marched for kilometres in the snow to railway stations, then transported for days at a time without food, water, or shelter in freight carriages originally designed for cattle. On arrival at their destination, they were then forced to march again to new camps. Prisoners who were unable to keep up due to fatigue or illness were usually executed by gunshot. 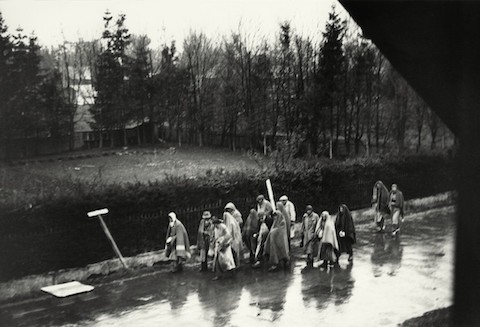 The first evacuation of Majdanek inmates started in April 1944. The prisoners of Kaiserwald were transported to Stutthof or killed in August. Mittelbau-Dora was evacuated in April 1945. The largest death march in World War II was from Auschwitz-Birkenau to Loslau in January 1945.

To almost the last day of the war, German authorities marched prisoners to various locations in the Reich. As late as May 1, 1945, prisoners who had been evacuated from Neuengamme to the North Sea coastline were loaded onto ships; hundreds of them died when the British bombed the ships a few days later, thinking that they carried German military personnel.

The SS killed large numbers of prisoners by starvation before the marches, and shot many more dead both during and after for not being able to keep pace. Seven hundred prisoners were killed during one ten-day march of 7,000 Jews, including 6,000 women, who were being moved from camps in the Danzig region. Those still alive when the marchers reached the coast were forced into the Baltic Sea and shot.

The SS guards had strict orders to kill prisoners who could no longer walk or travel. As evacuations depended increasingly on forced marches and travel by open rail car or small craft in the Baltic Sea in the brutal winter of 1944-1945, the number who died of exhaustion and exposure along the routes increased dramatically. This encouraged an understandable perception among the prisoners that the Germans intended them all to die on the march. The term death march was probably coined by concentration camp prisoners

Settela Steinbach the Sinti girl in the Westerbork train.