Having swept through Greece in April 1940, German forces began preparing for the invasion of Crete.

This operation was championed by the Luftwaffe as the Wehrmacht sought to avoid further engagements prior to commencing the invasion of the Soviet Union (Operation Barbarossa) in June. Pushing forward a plan calling for the mass use of airborne forces, the Luftwaffe gained support from a wary Adolf Hitler. 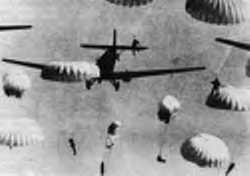 Planning for the invasion was permitted to move forward under the restrictions that it not interfere with Barbarossa and that it utilize forces already in the region.

Dubbed Operation Mercury, the invasion plan called for Major General Kurt Student’s (see Student) XI Fliegerkorps to land paratroopers and glider troops at key points along Crete’s northern shore to be followed by the 5th Mountain Division which would be airlifted into captured airfields. Student’s attack force planned to land the bulk of its men near Maleme in the west with smaller formations dropping near Rethymnon and Heraklion to the east. The focus on Maleme was the result of its large airfield and that the attack force could be covered by Messerschmidt Bf 109 fighters flying from the mainland.

As the Germans moved forward with invasion preparations, Major General Bernard Freyberg, VC worked to improve Crete’s defenses. A New Zealander, Freyberg possessed a force consisting of around 40,000 British Commonwealth and Greek soldiers. Though a large force, approximately 10,000 lacked weapons and heavy equipment was scarce. In May, Bernhard Freyberg (see Freyberg) was informed via Ultra radio intercepts that the Germans were planning an airborne invasion. Though he shifted many of his troops to guard the northern airfields, intelligence also suggested that there would be a seaborne element.

As a result, Freyberg was forced to deploy troops along the coast that could have been used elsewhere. In preparation for the invasion, the Luftwaffe began a concerted campaign to drive the Royal Air Force from Crete and establish air superiority over the battlefield. These efforts proved successful as British aircraft were withdrawn to Egypt. Though German intelligence wrongly estimated the island’s defenders to only number around 5,000, the theatre commander, Colonel General Alexander Löhr (see Löhr), elected to retain the 6th Mountain Division at Athens as a reserve force.

In the fighting and abadon for Crete, the Allies suffered around 4,000 killed, 1,900 wounded, and 17,000 captured. The campaign also cost the Royal Navy 9 ships sunk and 18 damaged. German losses totaled 4,041 dead/missing, 2,640 wounded, 17 captured, and 370 aircraft destroyed. Stunned by the high losses sustained by Student’s troops, Hitler resolved never to conduct a major airborne operation again. Conversely, many Allied leaders were impressed by the airborne’s performance and moved to create similar formations within their own armies. In studying the German experience in Crete, American airborne planners, such as Colonel James Gavin (see Gavin), recognized the need for troops to jump with their own heavy weapons. This doctrinal change ultimately aided American airborne units once they reached Europe.

My hometown Eindhoven liborated by the 506th “Band of Brothers”.
Did You Know 3