as second of three sons of Magnus von Braun,

German chemical engineer, Luftwaffe aviator, rocket scientist and businessman. In his twenties he worked with his brother as a rocket scientist at Peenemünde. Magnus Jr died age 84 on 21-06-2003, Phoenix, Arizona, And youngest brother Sigismund, Sigismund

became a German diplomat and Secretary of State in the Foreign Office (1970–1972) and died age 87 on 13-07-1998, in Bonn. His parents were both from Prussian landed gentry, the so-called Junkers, who traditionally made their career in the army or politics. His father also went through an administrative and political career, in which he had to resign because of support for the Kapp putsch, but later he became a minister in the last two cabinets of the Weimar Republic (Kabinet-Papen and Kabinet-Schleicher). Franz “Fränzchen” von Papen

Wernher received a telescope from his mother, who, like her son Wernher, was gifted in natural sciences and technology. His interest in astronomy and the universe stimulated by this, remained throughout his life. From his teenage years, von Braun held keen interest in space flight,

, Oberth died at the very old age of 95 and is buried on the Neuer Friedhof Feucht, Nürnberger Land, on 28-12-1989. As a boy Werner showed only a modest ability in mathematics and physics, subjects in which he would later excel. Von Braun soon learned that he would have to excel in mathematics to even understand the concepts and principles in the book. Even during these younger years of his life, von Braun was experimenting with rockets and propulsion. Wernher became involved in the German rocket society, Verein fur Raumschiffahrt (VfR), as early as 1929

gave him his first telescope. When he was thirteen he launched a toy car with some firework. The car flew through a busy street and catched fire. The young von Braun was taken to the police station and his father had to take him home. As a means of furthering his desire to build large and capable rockets, in 1932 he went to work for the German army to develop ballistic missiles. While engaged in this work, von Braun received a Ph.D. in physics on 27-07-1934.

Chancellor Adolf Hitler (bottom center) and Wernher von Braun (front row in the middle above) pose in the spring of 1934 in front of the officers’ mess of the experimental shooting range Kummersdorf.  Between 1932 and 1937, Von Braun was employed by the German Ordnance Department. He joined the NSDAP

. Von Braun worked together with Major General of the Raketentruppe, Walter Dornberger

operating at a secret laboratory at Peenemünde on the Baltic coast, the V–2 rocket was the immediate antecedent of those used in space exploration programs in the United States and the Soviet Union. A liquid propellant missile extending some 46 feet in length and weighing 27,000 pounds, the V-2 flew at speeds in excess of 3,500 miles per hour and delivered a 2,200-pound warhead to a target 500 miles away. First flown in October 1942, it was employed against targets in Europe beginning in September 1944. Magnus von Braun arrived at Peenemünde in July 1943 at the request of Wernher. In March 1944 he was arrested with fellow rocket specialists, Klaus Riedel

, who was killed in a car accident two days after his thirty-seventh birthday, on 04-08-1944. There is a memorial and small museum dedicated to him in Bernstadt

and in 1970 a crater on the moon was named after him. Helmut Gröttrup

, who had taken part in the D-Day landings in Normandy, was in his early 20s and a signals operator with Combined Operations when he was chosen as the radio man with the army unit given the task of dashing to von Braun’s headquarters at Peenemunde. But before the team had started on their mission, they were assembled below decks on the landing ship taking them across the Channel and sworn to secrecy for 50 years. Before the team set out across Europe, they were told they were answerable only to British Prime Minister Sir. Winston Churchill,

waiting in his bunker in London for word of their success. When Mr Earnshaw and the team arrived at Peenemunde the gates were closed and the German soldier on guard had to let them in, explaining that since the war was still officially on, they had to consider themselves his prisoners. In late summer 1944 he transferred to the Mittelwerk where he engineered V-2 rocket gyroscopes, servomotors, and turbo pumps.

Fort Bliss Army CIC agents believed Magnus von Braun was a “dangerous German Nazi”, with one agent remarking, “his type is a worse threat to security than a half a dozen discredited SS Generals. Magnus Jr `Mac`. died old age 84 on 21-06-2203 in Phoenix, Arizona. Wernher von Braun was captured by the SS and Gestapo and imprisoned in Stettin, falsely blamed by Heinrich Himmler

himself of communistic ideas and sabotage with the development programme of the V2, but after protests of Dornberger and Albert Speer

hat von Braun couldn’t be missed for war fare, he was released again after fourteen days. By the beginning of 1945, it was obvious to von Braun that Germany would not achieve victory against the Allies, and he began planning for the postwar era. Before the Allied capture of the V–2 rocket complex, they found 10.000 V2 ready for using?, von Braun engineered the surrender of 500 of his top rocket scientists, along with plans and test vehicles, to the Americans 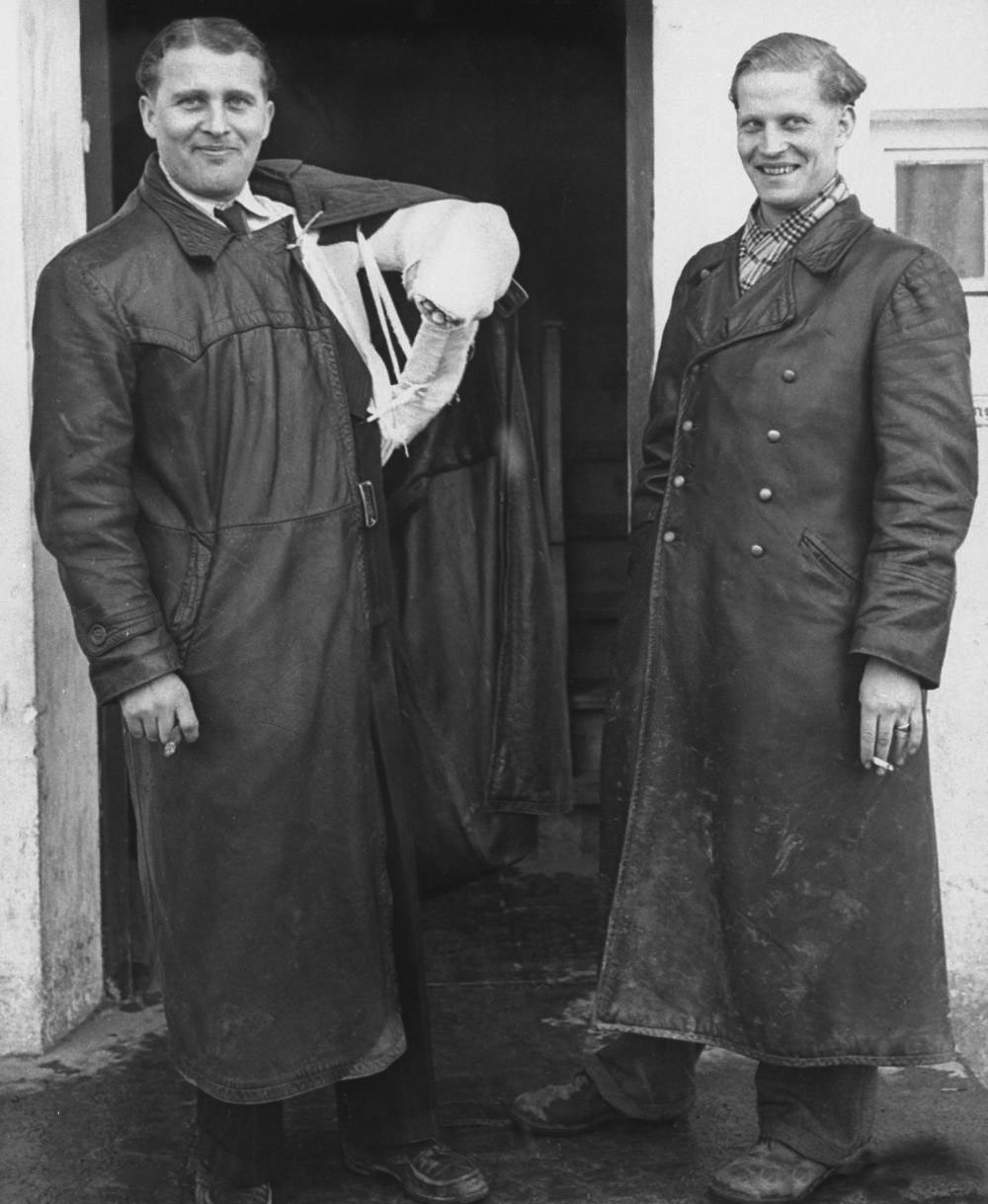 . Von Braun and his brother and 126 other German engineers came to the United States in September 1945 under contract with the U.S. Army Ordnance Corps

as part of Operation Paperclip. He worked on high altitude firings of captured V-2 rockets at White Sands Proving Ground. Living in the USA he met Hanna Reitsch

the former German female test pilot, who he admired very much. Tom Lehrer, an American singer-songwriter, satirist, pianist, and mathematician, song mockingly “Once rockets are up, who cares where zey come down. That is not my department, says Wernher von Braun”. During his stay at Fort Bliss, von Braun mailed a marriage proposal to 18 year old Maria Luise von Quistorp,

his cousin on his mother’s side. On 01-03-1947, having received permission to go back to Germany and return with his bride, he married her in a Lutheran church in Landshut, Germany. He and his bride and his father and mother returned to New York on 26-03-1947. On 09-12-1948, the von Brauns’ first daughter, Iris Careen, was born. The von Brauns eventually had two more children,

Margrit Cécile on 08-05-1952, and Peter Constantine on 02-06-1960. On 15-04-1955, von Braun became a naturalized citizen of the United States. Werher von Braun would bring the US on the moon and it is hard to reconcile the von Braun of Nazi Germany with the same man who almost highhandedly led the United States to preeminence in the space age. Walt Disney

thoroughly legitimized von Braun in the eyes of the public, whatever aware intellectuals may have thought of him. Certainly his vision for the future of space exploration was as pure as the driven snow, but the means by which he pursued that vision were not always so. The evidence points to a lively cooperation with the Nazi regime, but certainly there must have been remorse as it became apparent that the entire world would focus on his Nazi past. Braun claimed to have worn the SS uniform only once. He began as an SS Untersturmführer, Second Lieutenant and was promoted three times by Himmler, the last time in June 1943 to SS-Sturmbannführer

, Wehrmacht Major Still, the man seems to have forgiven himself, and gone on to accomplish in terms of the U.S. space program what nobody else dreamed could be done. Certainly, manned space flight to the moon was his brainchild. Since his departure from NASA, the space program could hardly hold a candle to what that organization accomplished under his leadership. Working in the USA, he got a visit from a still Nazi and old friend, the flyer ace Hanna Reitsch .

Wernher von Braun died of kidney cancer, in Alexandria, Virginia, at the age of 65, on 16-06-1977, and is buried on the cemetery of Ivy Hill in Alexandria, USA.