joined the Army Service age 19, on 30-03-1908 as Fahnenjunker in the Kaiserliche Armee, with the Königlich Sächsisches 8. Infanterie-Regiment “Prinz Johann Georg” Nr. 107

. Promoted to Leutnant on 20-08-1907 and was in the fields of the first war as an Oberleutnant with the 182nd Königlich Sachsische Infantry Regiment. He was awarded with both the Iron Crosses

. He was allowed in the new Reichswehr. Appointed to Commander of the 35th Infantry Regiment in Karlsruhe he was in the fields of the Western front in 1939

and received the clasps of the Iron Cross.

was promoted to General

of the Infanterie and lost his command to became the commanding General of the LI Army Corps. With this Corps he was involved in the invasion of the Balkan and transferred to the Eastern battlefields for the attack on south Russia. He was awarded with the Iron Cross of the Iron Cross on 22-09-1941 after the battles in the area of Kiew and landed in the Führer Reserve on 08-05-1942 and from June 1942 Commanding General of the LXXXVIII Army Corps in the Netherlands (see About) (see Jan Ackermans). 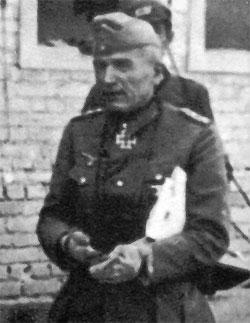 .He protested as in autumn 1944 the German Para’s in Holland started to plunder and ordered a disciplined behavior.

At the same time  he was commander of Wehrkreis IV until 10-04-1945 and again in the Reserve and didn’t get a command anymore until the end of the war.

Reinhardt (right) with Heinz Guderian, 1938  Living in Karlsruhe Reinhard died at the age of 61, on 06-10-1950 and is buried with his wife Dorothea, born Mosebach, who died old age 92, in 1981, on the Hauptfriedhof of Karlsruhe, close by the graves of Generalmajor der Flieger,Ersatz der 12th Armee, Carl Fink