from Alexander von Seydlitz-Kurzbach and his wife Helene von Guenther as one of their eight children. He was a direct descendant of the famous Prussian General Friedrich Wilhelm Freiherr von Seydlitz.

He had seven siblings and made his final examination in 1908 and joined the Reichswehr as a Fahnenjunker, shoulder emblem,

with a Feldartillerie Regiment in Danzig. After he finished the war school he was promoted to Leutnant in 1910. During World War I he served on both fronts as an officer. In 1916/17 in the West  at the Somme river and in 1918 in the East. Promoted to Oberleutnant in 1915 and to Hauptmann in 1917 he received both the Iron Crosses

and the wounded medal in Silver

and in 1918 the Ritterkreuz des Königlichen Hausordens von Hohenzollern

Von Seydlitz was allowed in the new Reichswehr as an officer with the Border Protection Feldartillerie Brigade on the East border in Schwerin. From 1929 he was as Adjutant with the Chief of the Army Weapon Department in the Reichswehrministry and promoted to Major in 1930. In 1933 he was transferred as commander of  a Cavalry Artillerie Regiment in Verden, where his family lived. Promoted to Oberstleutnant in 1934 and to Oberst in 1936 with the command of the 22nd Artillerie Regiment with the 22nd  Infantry Division

, under command of then Generalleutnant Adolf Strauss.

The last remains of this division surrendered to the British near Klagenfurt on 11-05-1945. He lost his command of the 22nd and was assigned as commander of the Artilleriekommand 102, Arko102 in Potsdam and from 01-12-1939 promoted to Generalmajor. In March 1940 he was relieved from this command and appointed as commander of the 12th Infantry Division

who died age 81 on 03-02-1967 in Malente. Von Seydlitz was commander of this division during the invasion in the West in May 1940 and awarded with the clasps of the his Iron Crosses. After the Western campaign his division remained in France as occupation force and he was awarded with the Knight Cross of the Iron Cross. His division took part in the invasion of Russia, Operation Barbarossa, as an unit in the 16th Army under command of Generalfeldmarschall Ernst Busch.

Promoted to Generalleutnant on 01-12-1941 and awarded with the Oak Leaves.

When the division was encircled in the Demyansk Pocket, von Seydlitz was responsible for breaking the Soviet cordon and enabling German units to escape from encirclement, for this action he was promoted to General of the Artillery and appointed commander of the LI Corps. He was recipient of the Knight’s Cross of the Iron Cross with Oak Leaves. 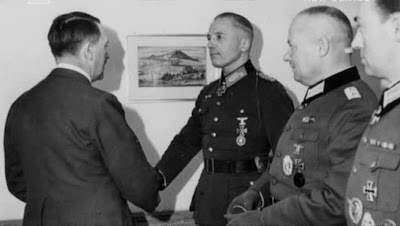 The corps was subordinated to the Sixth Army

during the Battle of Stalingrad, Friedrich Paulus

When the entire Army was trapped in the city in the course of the Soviet Operation Uranus, von Seydlitz was one of the Generals who argued most forcefully in favor of a breakout, in contravention of Hitler’s orders.

On the surrender of the remaining forces in Stalingrad, Seydlitz was taken into Soviet custody, where he was interrogated by Captain Nikolay Dyatlenko, he died in 1996, age 82.

Marshal Voronov, Dyatlenko and Field Marshal von Paulus. As a POW he became the leader of the anti-Nazi organization, the League of German Officers, Bund Deutscher Offiziere and a prominent member of the National Committee Free Germany, Nationalkomitee Freies Deutschland

He was condemned by many of his fellow Generals for his anti-Nazi activities and was sentenced to death in absentia. His idea of creating an anti-Nazi force of some 40.000 German POW’s to be airlifted into Germany was not considered credible, while in Germany his family was taken into Sippenhaft, prison, detention for the crimes of a family member. Von Seydlitz was ultimately exploited by both Soviet and German propaganda: he was used by the former in broadcasts and literature to encourage German soldiers to surrender, while the latter cultivated the idea of “Seydlitz troops” , German: Seydlitz truppen.

In 1949 von Seydlitz, who showed little inclination to cooperate with Soviet authorities after the war, requested release into the Soviet occupation zone of Germany. This was refused, and he was charged with atrocities committed against Soviet POWs and the civilian population while in Wehrmacht service. In 1950, a Soviet tribunal sentenced him to 25 years’ imprisonment, but in 1955 he was released to West Germany, where in 1956 his Third Reich death sentence was nullified.

Walther Kurt von Seydlitz-Kurzbach died on 28-04-1976, age 68 in Bremen. He is buried with his wife Ingeborg, born Barth, who died age 83, 22-04-1987, on the cemetery Riensberg in Bremen, between several WWII colleagues as, Generalarzt, Wehrmacht Generalarzt 10st Heereskorps, Dr. Rudolf Attig,