near Ulm, the son of a doctor. In the years 1890 to 1898 he attended a humanisus gymnasium in Munich.  Then joined the 1st Bavarian Pioneer Battalion in Munich on 15-07-1989 as a so-called “Avantageur” Fahnenjunker without cadet corps training.  In 1913 joined the General Staff as a Hauptmann. He served as a staff officer in World War I. For the first two years of WWI, List was in the Bavarian 11 Corps

, seeing a good deal of action on the Somme, at Ypres, then in Flanders, on the Maas, and he also took part in the Battle of Mosel.
In the 1916 summer he was off to the East, and was in the Balkans, and with Turkish troops, in 1917 we find Wilhelm List back on the Western front as Operations Officer with the Bavarian  8th Reserve Infantry Division

he was made responsible for integrating the Bundesheer into the Wehrmacht. During 1939 List commanded the German 14th Army in the invasion of Poland, succeeded by General Eberhard von Mackensen.

on the Eastern Front in the Soviet Union. It was List’s task to advance his army into southern Poland immediately on the outbreak of hostilities, although he met advance elements of the German XIX Panzer Corps under the command Generaloberst der Panzertruppe, Heinz Wilhelm Guderian

a short distance south of Brest-Litovsk, on 17-09-1939. Following the conclusion of the fighting in Poland, which was accelerated by the occupation of the eastern part of the country by Soviet forces, as agreed to in the Molotov–Ribbentrop Pact.

The invasion of Greece, and of Yugoslavia, started on 16-04-1941. The 12th Army, commanded by List, consisted of four armored divisions and eleven motorized infantry divisions, and totally over matched the defending forces. In early July 1942, List a over sized Bavarian, with an unpleasant, sour faced man with a wedge moustache, took command of Army Group A

and his orders were to take Rostov and then advance into the Caucasus as far as Baku to capture the oil-rich region. However, by the end of August their advance had ground to halt, chiefly due to critical shortages of fuel and ammunition as the army group outran its supply lines.

Soviet resistance had also stiffened considerably, and matters were made worse for the Germans by the removal in mid-August of most Luftwaffe combat units to the north to support to the Sixth Army’s

drive on Stalingrad. Adolf Hitler was angered by the loss of momentum, and when List proposed moving some stalled spearhead units to another, less advanced portion of the front to assist in destroying stubborn Soviet forces, Hitler despite the protests of Generaloberst Franz Halder

relieved him of command on September 9 and placed himself in charge of Army Group A. List spent the rest of the war at his home in Garmish-Partenkirchen and never returned to active duty. List was captured by the Allies after the war. In 1947, List and 11 former subordinates were brought before a U.S. military court 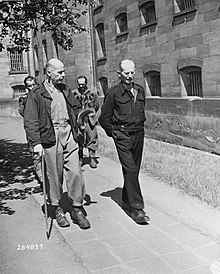 , charged with war crimes and crimes against humanity – primarily the reprisal killing of hostages in retaliation for partisan activity. List was convicted in this Hostages Trial. He was sentenced to life imprisonment in February 1948 in prison Landsberg.

List was released from prison in December 1952, officially because of ill health. However, but he lived for another 19 years, and died on 17-08-1971, old age 91. Wilhelm List is buried on the Waldfriedhof, in Munich.