Manton enlisted in the U.S. Army in 1916. Thoroughly the infantryman, Manton Eddy served in France in World War I in rifle and machine gun units. Promoted to major, he served in the army of occupation in Germany until 1919. The years of preparation and training returned great dividends to the Army. In 1941 Eddy became commanding officer of the 114th Infantry Regiment. one year later he was promoted to Brigadier General and given command of the 9th Infantry Division

nickname “Old Reliables”, in campaigns in Tunisia, Sicily, and Normandy, with General  Dwight “Ike” Eisenhower and Bernard Montgomery. The 9th infantry Division had the next casualties during their European campaign, killed 2.905, wounded 14.066, missing in action 792, captured 868 and battle casualties 18.631. Eddy was the officer who saved Georg Smith Patton (his driver Horace Woodring) from a bad choice of words on the eve of the Sicily invasion. Patton began an amazingly bellicose and agitated tirade about what we were going to do to the enemy when we got to Sicily. Then he said, “And gentlemen, when we land on the beaches of Sicily, there will be no prisoners taken.” Eddy stepped forward and tugged gently at Patton’s shirtsleeve. “General,” he said so softly I could barely hear him, “you might want to rethink your last statement.” As Commander of XII Corps, his units successfully held the southern shoulder of the German salient in the Battle of the Bulge, where the 101 Airborne Division 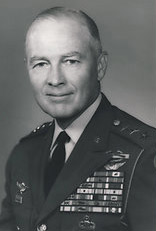 The Battle of the Bulge involved about 610.000 American men, of whom some 89.000 were casualties, including 19.000 killed. It was the largest and bloodiest battle fought by the United States in World War II. During World War II, most U.S. black soldiers still served only as truck drivers and as stevedores (except for some separate tank, tank destroyer, and artillery battalions as well as in Army Air Force fighter units). In the midst of the Battle of the Bulge, General Eisenhower was severely short of replacement troops for existing military units which were totally white in composition. Consequently, he made the decision to allow African American soldiers to pick up a weapon and join the white military units to fight in combat for the first time. More than 2.000 black soldiers had volunteered to go to the front. This was an important step toward a desegregated United States military. A total of 708 African Americans were killed in combat during World War II. The 101 Airborne Division had the next losses during their campaign in Europe; In Normandy, killed/died of wounds 868, wounded in action 2.303, missing/captured 665. In Holland killed 752, wounded 2.151 and missing 398. In the battle of the Bulge in Belgium, killed 482, wounded 2.449 and missing 527, in total killed 2.043, wounded 2.782 and missed 1590. For their efforts during World War II, the 101st Airborne Division was awarded four campaign streamers and two Presidential Unit Citations. In April 1945, Eddy returned to the USA because of a illness. For his role in the capture of Cherbourg and his defender General der Infanterie, Karl Wilhelm von Schlieben He retired in 1953. General Manton Eddy died in Fort Benning on 10-04-1962, at the age of 69 and is buried on the Arlington Cemetery, in Section 3. Close by in Section 3 the graves of the Major General, Commander, G1 (Personnel) Section, Headquarters SHAEF, Charles Bonesteel, 101st Airborne