2* Rear Admiral and command of Battleship Division I.

into a wealthy family. He was the oldest of the four children of Isaac Kidd and Inez Nellie, born Campbell. He was a Golden Gloves Boxer while still in high school. He married Inez Nellie Gillmore in 1911. His mother, Jemima Campbell, was the heir to the Campbell Block in the Flats area of Cleveland. The Campbell block was a collection of buildings that served as apartments and other small shops and services. These buildings do not stand today as they were demolished in December 1975. Kidd lived on the west side and attended Cleveland Public Schools. He graduated from West High School in 1902. Former Ohio Senator Marcus Hanna recommended him for an appointment to the U.S. Naval Academy. During his time at the U.S. Naval Academy,

Kidd excelled at both football and boxing. He earned the title of heavyweight boxing champion at his college. He graduated in 1906.  Kidd went on to marry Inez N. Gillmore on 29-04-1911. He was a lieutenant in the U.S. Navy at this time.

Isaac Sr. was an American Rear Admiral in the United States Navy. Kidd was killed, age 57, on the bridge of the USS Arizona 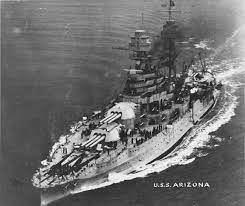 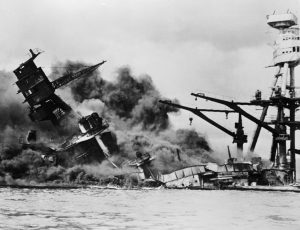 during the Japanese attack on Pearl Harbour,

the highest ranking American killed by the Japanese since 73 years earlier, with the death of Rear Admiral Henry Haywood Bell

age 59 on 11-01-1868 in the Osaka Bay at Kobe, while trying to force Japan open to trade. Isaac was the father of Admiral Isaac Campbell Kidd Jr. He was a posthumous recipient of his nation’s highest military honour — the Medal of Honour.

The highest ranking casualty at Pearl Harbour, he became the first U.S. Navy flag officer killed in action in World War II as well as the first killed in action against any foreign enemy. A Fletcher-class destroyer, the USS Kidd, was commissioned in his honour on April 23-04-1943. The second ship named after him, the USS Kidd DDG-993 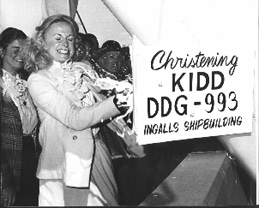 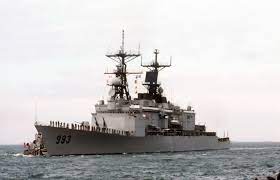 During the Japanese attack on Pearl Harbour on 07-12-1941, Rear Admiral Kidd was the Commander of Battleship Division One and the Chief of Staff and Aide, to the Commander, Battleship Battle Force. At his first knowledge of the attack, he rushed to the bridge of USS Arizona, his flagship, 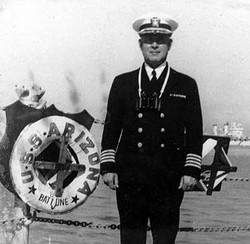 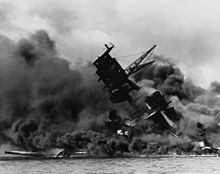 and “courageously discharged his duties as Senior Officer Present Afloat and the ship was then hit by several bombs, one of which penetrated her forecastle and detonated her forward ammunition magazines. The resulting massive explosion totally wrecked the ship’s forward hull, collapsing her forward superstructure and causing her to sink, with the loss of over 1.100 of her crewmen. a direct bomb hit on the bridge which resulted in the loss of his life.

Admiral Kidd’s body was never recovered and to this day he is considered missing in action. U.S. Navy salvage divers located his Naval Academy ring fused to a bulkhead on the Arizona’s bridge. A trunk containing his personal memorabilia was found in the wreck and sent to his widow. Rediscovered in the attic by his children, both the trunk and its contents are now displayed in the museum at the USS Arizona Memorial. 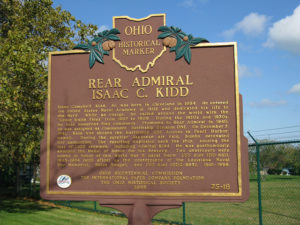 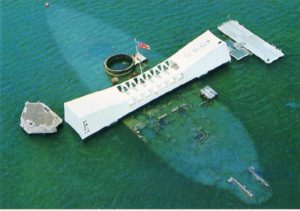 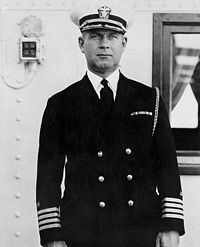 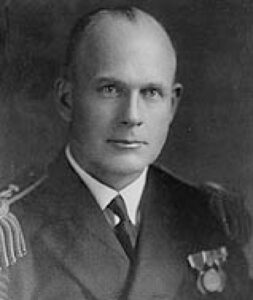 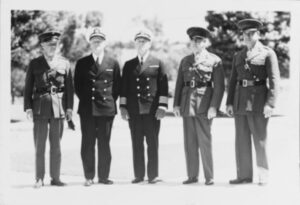 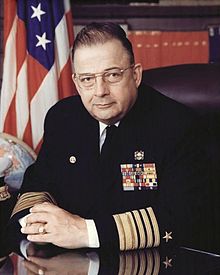 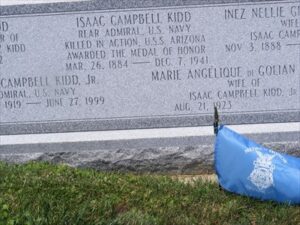 during World War II served as a gunnery and operations officer on destroyers in both Europe and the Pacific, and participated in various Allied landings in the Mediterranean as well as at Iwo Jima. He also taught the law of the sea at the College of William and Mary. His six children included Navy Captain Isaac Campbell. Kidd III.

Kidd Jr. died of cancer at age 79 at his home in Alexandria, Virginia, and was buried in the Naval Academy Cemetery, with his mother Inez Nellie, born Gilmore who died old age 89 on 11-05-1978. Rear Admiral Isaac Campbell Kidd ‘s name is on the gravestone too and he is remembered in the Pearl Harbour bay with his crew. 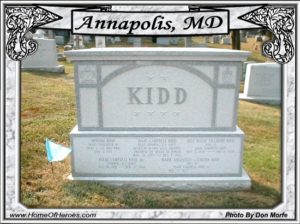 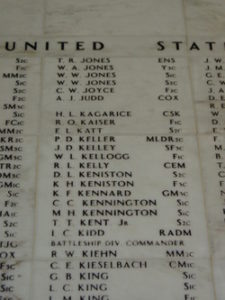 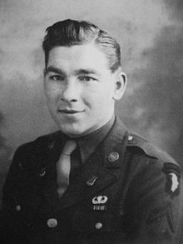 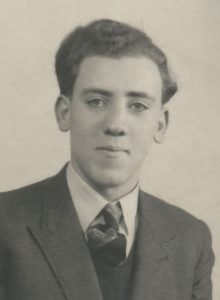