the 10th of 11 children  of an Irish immigrant who had served as a Union drummer boy in the American Civil War.

Collins was the nephew of Martin Behrman,

the mayor of New Orleans from 1904 to 1920 and again from 1925 to his death on 12-01-1926, age 61. Behrman used his influence to gain Collins an alternate appointment to West Point – one that he could only take up if the first nominee failed his entry examination. In the first example of what Collins called his ‘usual Irish luck’, the principle candidate failed, and Collins took up his place at West Point on 02-06-1913, and graduated in 1917 and joined the United States Army. Commissioned in the infantry he was disappointed not to get sent to Europe during the during the First World War. Collins became an instructor in the US Army College, where he impressed General George Catlett Marshall

. On the outbreak of World War II he was appointed to Chief of Staff in the new 6th Corps Headquarters in Birmingham. After the Japanese attack on Pearl Harbor

,Collins and the 6th Corps staff moved to the West Coast, where they were to serve under General John Lesesne De Witt, but Collins’ ‘Irish luck’ struck again. General  Walter Campbell Short

the senior Army officer at Pearl Harbor, was recalled ten days after the attack and was replaced by Major General Herbert Arthur “Bert” Dargue.

Dargue was killed in a plane crash while on his way to Hawaii, age 55, on 12-02-1941, the first US General to die on duty in WWII and was replaced by General Delos Carleton Emmons,

while Collins was appointed as the new Chief of Staff of the Hawaiian Department. Emmons died age 76, on 03-10-1965. In February 1942 Joe Collins was promoted to General Brigadier and three months later was placed in command of the 25th Infantry Division

The 25th Infantry Division, nicknamed “Tropic Lightning“, “Electric Strawberry”, casualties during WWII: 5.432. in 260 days of combat and the Cú Chi National Guard during the Vietnam War and his troops relieved the US Marines in Guadalcanal. Collins took part in the attack on Kokumbona, in January 1943 and he gained his nickname during this period in the Pacific, from his Divisional HQ’s code name – ‘Lightning’.

considered Collins too young for a three stars General and Marshall arranged for him to join Dwight “Ike” Eisenhower in Britain.

was given command of the 7th Corps

and during the D-Day landings led his men in securing Utah Beach. On D-Day 7th Corps was responsible for the landing on Utah Beach,

under General Maxwell Taylor and the 82nd

caused such much confusion behind German lines that no coherent counterattack ever emerged. Collins with his 7th Corps made steady progress taking Cherbourg on 27th June and after being held up at St Lo he broke through German lines and was able to help General Georg Smith Patton

and the US 3rd Army in Brittany. With France liberated Collins and the 7th Corps moved into Nazi Germany through the Aachen Gap. After encountering stubborn resistance from the German Army Collins eventually got into the Ruhr and took Cologne on 11-03-1945. Heavy fighting at Paderborn he defeated General Walter Model, who desperated committed suicide. Promoted to Lieutenant General in 1945, the German Generals consider Collins to be the best commander in Europe. Collins remained in Europe after the war and in 1947 was appointed deputy Chief of Staff to General Dwight D. Eisenhower. He remained in this position when Eisenhower was succeeded by General Omar “Brad” Bradley

Lightning Joe passed away at the very old age of 91, on 12-09-1987 and is buried with his wife Gladys, born Easterbrook, who died age 65, in 1959, on the Arlington Cemetery in Section 30, as his brother Major General James Lawton Collins.

Close by the graves of Lieutenant General, Commander of the 26thInfantry Division, Willard Paul 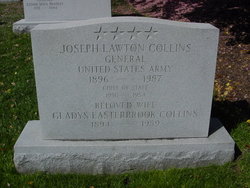