near Euskirchen,  the son of the director of a wholesale wine business.

It was claimed that his father demanded “correct and pious behaviour” and that his mother “provided the warmth and tenderness that softened this severity”. Graf later wrote: “I spent my early life in the circle of my parents and sisters. I never felt deprivation of any kind, since our family lived in rather good, if moderate circumstances… The relationship with my mother was extremely affectionate. She did everything for her children. Her concern for her family was her whole life.”  He became a member of the White Rose (Weiße Rose)

resistance group in Nazi Germany. It was not long before he joined, at the age of eleven, the Bund Neudeutschland, a Catholic youth movement for young men in schools of higher learning

, which was banned after Hitler (see Hitler Alois)

, another Catholic movement which became known for its anti-Nazi rhetoric. It, too, was banned and for this reason, it formed many splinter youth groups.He refused to associate with the Hitler Youth. While other future members of the White Rose initially embraced the Hitler Youth, Graf never did so.

Moreover, in his address book he crossed out the names of friends who had joined the Hitler Youth (see Hitler Paula)

In 1935, at the age of 17, Graf and a few friends marched in an annual May Day parade. The parade was a dominated by swastikas, brown-shirted Hitler Youth troops marching in formation, and “Sieg Heils.”, here led by SA man Horst Wessel.

However, Graf and his friends were not wearing brown, marching in step, carrying swastikas, or shouting “Sieg Heil.” Instead, they marched under their tattered school flag, making great effort to stand out from the Nazi masses. In 1938, he was arrested along with other members of the Grauer Orden and charged by a court in Mannheim with illegal youth league activities. The detention had lasted three weeks. His time in jail did not weaken his resolve to participate in anti-Nazi activities or organizations.In early 1940 Graf was conscripted into the German army as student-soldier. From 1940 to 1942, Graf participated in various war deployments in Europe as a medical orderly. During these deployments he experienced the depths of war which included seeing the Warsaw ghetto in Poland, harsh treatment of Russian civilians, and being forced to consume horse meat due to ration shortages on the Russian front. Willie Graf was very disturbed by what he witnessed in the Soviet Union. As a soldier in a combat zone, he had expected to encounter wounds and death. He had been prepared for that. However, he was shocked and appalled by the way that civilians and captured members of the Red Army had been treated. He wrote to his sister: “The war here in the East leads to things so terrible I would never have thought them possible… Some things have occurred… that have disturbed me deeply… I can’t begin to give you the details… It is simply unthinkable that such things exist… I wish I hadn’t had to see what I have seen…. I could tell you much more but do not want to trust it to a letter.”  He was horrified by the suffering he witnessed. In his army medic files it was noted that his care of the ill was “exemplary.” It was also noted by Dr. Webel, the Chief Medical Officer, that Graf “showed himself to be an intrepid medic who never thought about his own safety.” Graf was granted the service medal, 2nd class with swords,

Hubert Furtwangler, Hans Scholl, Willie Graf and Alexander Schmorell on the Eastern Front (1942)  In 1942, as a member of the Second Students’ Company in Munich, he came into contact with the Nazi resistance organization, the White Rose. He became an active member of this resistance group that centered around Hans and Sophie Scholl

Graf’s main role in the White Rose was function as a recruiter in other cities around Germany. He also participated in anti-Nazi and anti-Hitler graffiti campaigns.

was seized in Munich. Willi Graf said almost nothing in his defence when he appeared in the dock. Judge Roland Freisler told Graf that he “had the Gestapo running in circles for a while… but in the end we were too smart for you, weren’t we?” Graf stood tall, pale, his features closed, his blue eyes remote”. When he refused to answer questions Freisler ordered him to leave the dock. “Graf sat down, his eyes blank; it was as if his spirit had left the chamber.” 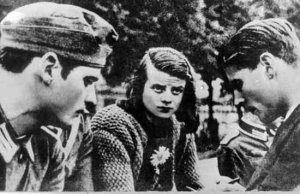 Willi Graf 19-04-1943, was sentenced to death at the Volksgerichtshof for high treason,

.  In his last letter to his parents willi wrote: I beg you father and mother with all my heart to forgive me for all the suffering and disappointment I grief  to you. I often in prison was so very sorry for what I did to you. Willi Graf

was beheaded on 12-10-1943, age 25, at Stadelheim Prison in Munich, after 6 months of solitary confinement. Graf is buried on the cemetery St Johann, in Saarbrücken.