Short, Walter Campbell, born 30-03-1880, in the rural Illinois town of Fillmore, as the son of a physician, he enjoyed a comfortable upbringing. Short attended the University of Illinois, graduating in 1901. He then obtained a position as teacher of mathematics at the Western Military Academy

for one year before accepting a commission in the U.S. Army in March 1902. On the eve of World War II, Short had enjoyed a successful military career. He had extensive experience as a staff and training officer, and some experience as a commander of troops. His rise through the ranks had been steady and somewhat rapid given the peacetime stagnation of the U.S. armed forces. In the fall of 1941, tensions between the Japanese, the United States, and the European powers in the Pacific were reaching the breaking point. Code breakers in the United States

were able to decode significant portions of Japanese diplomatic and naval communications, and were certain that an attack would be forthcoming. As such, war warnings were issued to all commanders in the Pacific, including Short and Admiral Husband Edward Kimmel on 27-11-1941. Short misinterpreted the message, which was vague in recommending a course of action to field commanders, as a warning to guard against sabotage of his forces by local Japanese sympathizers. The Japanese attacked Pearl Harbour on 07-12-1941, achieving complete surprise and inflicting perhaps the most decisive defeat ever suffered by U.S. forces. The defeat at Pearl Harbour spurred the U.S. to enter World War II and fuelled a national passion for revenge that would contribute to the eventual defeat of Japan.

It also created feelings of shock and shame as armed forces personnel, government officials and civilians wondered how American forces could have been surprised so completely, given the universally recognized tense political climate in the Pacific in the days prior to the raid. In such an atmosphere, the search for scapegoats was inevitable, and General Short and Admiral Kimmel were the most obvious targets for blame. On 16-12-1941, President Franklin Roosevelt appointed a commission to investigate the events leading up to the defeat at Pearl Harbour, and he relieved both Kimmel and Short of their commands on December 18. The commission’s report, issued in January 1942, cited both Hawaiian commanders for errors in judgment and authorized Chief of Staff George Catlett Marshall

to retire them from active service. Marshall acted upon this recommendation. Short was demoted to the rank of Major General and forced to retire on 28-02-1942. He was not allowed to testify in his own behalf during these proceedings.

A military inquiry into the defeat also began early in 1942 and came to its conclusion in October 1944. This inquiry found Short responsible in part for the lack of preparation at Pearl Harbour, but also found fault with Chief of Staff Marshall for issuing vague and contradictory orders regarding preparations for war with Japan. After his retirement from the military, Short took a position as a traffic manager for the Ford Motor Company in Dallas, Texas, where he remained until 1946. At that time he was able to testify before a congressional committee investigating the Pearl Harbour battle. In his testimony, Short argued that important information that could have averted the surprise had been withheld from him by both political and military agencies. He also freely admitted personal errors in judgment that had made the defeat more decisive than it otherwise would have been. Despite his testimony, the congressional committee concluded that Short and Kimmel were responsible for the defeat. In the years since the disaster at Pearl Harbour, historians have found less fault with Short and Kimmel than did their peers. Preparedness orders issued by Marshall on 27-11-1941, were indeed vague. These orders led to Short’s decision to bunch his aircraft on the ground making them easier to defend against sabotage by local Japanese sympathizers, but also easy targets for the military attackers. Revisionists have also postulated that President Roosevelt knew where and when the Japanese attack would occur and deliberately withheld this information from Short to ensure that they would attack and draw the U.S. into the war. Although code breakers in the U.S. knew that an attack was coming somewhere in the Pacific near the end of 1941, there is no hard evidence to verify that anyone knew that the attack would fall on Hawaii or any other U.S. territory. Furthermore, there is plentiful evidence that Marshall and Roosevelt were as shocked as everyone else when Pearl Harbour was attacked, although neither one may have regretted the subsequent U.S. entry into the war. Finally, it must be noted that the potential of naval aviation was grossly underrated by virtually all military establishments in 1941, and that many Japanese admirals opposed the Pearl Harbour raid on the basis that naval aircraft would not be able to decisively defeat a land or surface force. As Gordon Prange so aptly stated in Pearl Harbour: The Verdict of History, “One may sympathize with Short, understand his motives, and agree that Washington (D.C.) did not give him all the facts in its possession. But these things cannot mitigate the fact that Short failed in the event for which his whole professional life had been a preparation.

He was a good man and a competent general who meant all his actions for the best. However, according to the adage, the road to hell is paved with good intentions. And the private hell in which Short spent the rest of his life had at least some paving stones of his own quarrying.”

. Through the campaign, the division suffered some 7.268 casualties with 1,717 killed In action. Three soldiers from this division earned the Medal of Honor. Also buried in this section, Lee Saunders Gerow and 1* General Lieutenant, Commanding Officer Artillery, 11th Airborne Division, Francis William Farrell. Also a remembrance stone for the, age 44, missing in action Brigadier General, Charles Keerans the assistant commander of the 82nd Airborne Division under General Matthew Bunker Ridgway. 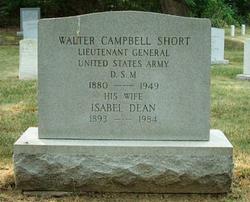