graduated from the United States Military Academy class of 1912. Many of his West Point classmates later became general officers during World War II as he did, such as Wade H. Haislip, John Shirley Wood,

Albert Eger Brown,  Gilbert Richard Cook and Millard Tillmore “Miff” Harmon.  As commander of the 1st Battalion, 8th Infantry Regiment he served in Germany from 1917 to 1923, being the last formation to leave.

at Utah Beach, to the Liberation of Paris, and into the Battle of the Hurtgen Forest before leaving the command due to health problems on 27-12-1944. The division’s casualties during the European campaign, 2.611 killed in action and 9.895 wounded in action. During the war he became friends with war correspondent, Ernest Hemingway

who sought his favor as the war correspondent assigned to the division and the two corresponded after. Hemingway wrote to Barton: You had one of the greatest divisions in American military history. During the Battle of Hurtgen Forest on the Weisser Weh stream near Grosshau, Germany General Barton gave up his belt for tourniquet material to medic Russell. York 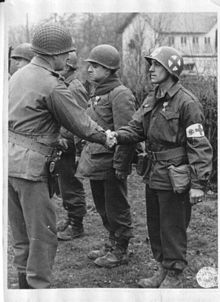 of his division at York’s request. Russel York died old age 81 on 17-01-2012. Lives were saved, and a Silver Star was personally awarded to Technician (Medical) 4th Grade York by General Barton for his actions.  In the film The Longest Day he is played by Edmond O’Brien. He appears in a scene where he allows his assistant division commander, Theodore Roosevelt Jr.

played by Henry Fonda to lead the division ashore at D-Day “Longest Day”. Fonda enlisted in the United States Navy to fight in World War II, saying, “I don’t want to be in a fake war in a studio.” Previously, he and Stewart had helped raise funds for the defense of Britain. Fonda served for three years, initially as a Quartermaster 3rd Class on the destroyer USS Satterlee

. Fonda was later commissioned as a Lieutenant Junior Grade in Air Combat Intelligence in the Central Pacific and was awarded the Navy Presidential Unit Citation and the Bronze Star. Fonda died 12-08-1982, age 77 of hear disease in Los Angeles, California, was cremated and his ashes scattered.

Major General Raymond Barton became one of only eleven Generals who commanded their divisions for the duration of their combat service. In early 1945, Barton briefly served as Commanding General 2nd Infantry Division, nicknamed “Indianhead”.

He then served as Chief of the Infantry Replacement Training Center at Fort McClellan, Alabama until his retirement from active duty in 1946. Barton himself died on 27-02-1963, age 73, in Augusta, Richmond County and was buried at Westover Memorial Park in Augusta, Georgia.