helped her father in his small Teterow wood shop, then worked temporarily in a factory, then as a hospital nurse. In 1939, Bothe was a member of the Leaque of German Girls

for women. The former nurse took a four-week training course and was sent as an overseer to the Stutthof camp near Danzig.. There she became known as the “Sadist of Stutthof” due to her brutal beatings of prisoners.

In July 1944, she was sent by Oberaufseherin Gerda Steinhoff

to the Bromberg-Ost subcamp. On May 25, 1945, Steinhoff was arrested by Polish officials and sent to prison. She stood trial with the other SS women and kapos and was convicted and condemned to death for her involvement in the selections and what was called her sadistic abuse of prisoners. She was publicly hanged on July 4, 1946, on Biskuia Gorky Hill, near Gdansk.

On 21 January 1945, the 24-year-old Bothe accompanied a death march of women prisoners from central Poland to the Bergen Belsen concentration camp near Celle. The Jewish girl Anne Frank wit h her mother and sister

died in this concentration camp. Father Otto Frank survived the war.. While en route to Bergen-Belsen, she and the prisoners stayed temporarily at Auschwitz concentration camp, arriving at Belsen between 20–26 February 1945.

Once in the camp Bothe supervised a wood brigade of sixty women prisoners. The camp was liberated on 15 April 1945. She is said to have been the tallest woman arrested, she stood 6′ 3″ (1.91 m). Bothe also stood out from other Aufseherinnen because, while most of the SS women wore black jackboots, she was in ordinary civilian shoes. The Allied soldiers forced her to place corpses of dead prisoners into mass graves adjacent to the main camp. She recalled in an interview some sixty years later that, while carrying the corpses, they were not allowed to wear gloves, and she was terrified of contracting typhus. She said the dead bodies were so rotten that the arms and legs tore away when they were moved. She also recalled the emaciated bodies were still heavy enough to cause her considerable back pain. Bothe was arrested and taken to a jail at Celle.

At the Bergen Trial she was characterized as a “ruthless overseer” and sentenced to ten years in prison for using a pistol on prisoners. Bothe admitted to striking inmates with her hands for camp violations like stealing but maintained that she never beat anyone “with a stick or a rod” and added that she never “killed anyone.”Her contention of innocence was deemed questionable as one Bergen-Belsen survivor claimed to have witnessed Bothe beat a Hungarian Jew named Éva to death with a wooden block while another teenager stated that he saw her shoot two prisoners for reasons he could not understand. Nevertheless, she was released early from prison on December 22, 1951 as an act of leniency by the British government. 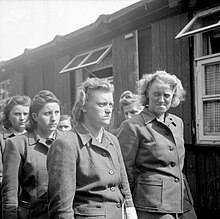 During a rare interview, that was broadcast in 2009, Bothe (living in Germany under the name Lange) became defensive when asked about her decision to be a concentration camp guard. She replied:

Did I make a mistake? No. The mistake was that it was a concentration camp, but I had to go to it, otherwise I would have been put into it myself. That was my mistake.

“Salon Kitty” was a high-class Berlin brothel used by the Nazi intelligence service.

Stauffenberg's 20 July plot at the Wolfschanze.
A survivor of both the Hiroshima and Nagasaki atomic bombs, Tsutomu Yamaguchi.