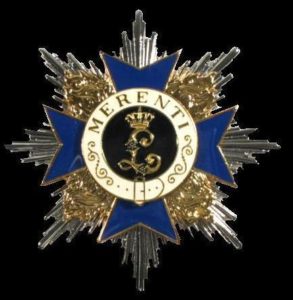 (did you know) pursued a military career in keeping with his family’s long tradition of military service. Commissioned in 1898 and accepted as a member of the Imperial General Staff, he received several decorations for distinguished service on the western front during World War One. Nominated for the Pour le Merité

, Stülpnagel survived personnel cuts mandated by the Treaty of Versailles. Promoted to the rank of Oberst in 1925 and Generalleutnant in 1931, Stülpnagel played a leading role in the Reichswehr in conjunction with Kurt von Schleicher

during the Weimar Republic. Von Bussche died age 72 on 13-01-1944, in Vienna. Days before the German invasion of Poland, Hitler recalled von Stülpnagel to active service and placed him in charge of a military district in Austria and he held the latter post for fourteen months. On 25-10-1940, German army high command transferred Otto von Stülpnagel to France and placed him in charge of a military government with the title of Military Commander in France. Not without controversy, this last assignment defined Stülpnagel’s career. Orders from Hitler placed the army and the MBF in charge of “security” but allowed other state and Nazi party agencies to exercise a degree of influence in Occupied France. The German ambassador in Paris, Heinrich Otto Abetz,

Abetz died in a car accident age 54, on 05-05-1958, first supervised and later controlled diplomatic relations between France and Germany, but the power amounted to little in practice. Hitler would not allow his ambassador to trade concessions for French cooperation, and formal negotiations between the Third Reich and Vichy regime came to naught. Able to control the flow of vital raw materials, food, and people across the demarcation line that separated occupied from unoccupied France, Stülpnagel could reward French cooperation by allowing people and goods to cross military checkpoints, or he could seal the borders and bring the French economy to a grinding halt. Control over both the demarcation line inside France and borders with Germany and Belgium gave the MBF considerable influence over German policy and French affairs. Otto von Stülpnagel played a major role in Bahamond Franco

German relations between October 1940 and January 1942. Determined to support the Nazi war effort by placing French industrial resources at the disposal of the German war economy, von Stülpnagel discouraged all activities that did not advance the German war effort. The latter goal placed him at loggerheads with Nazi party stalwarts who viewed the Second World War as a struggle against Jews and their alleged communist allies. Days after German troops occupied Paris, agents of the Einsatz Reichsleiter Alfred Rosenberg

hanged 16-10-1946 in Nuremberg and diplomats attached to the German embassy in Paris began to confiscate the art collections of prominent French Jews. Upset by the apparent seizure of France’s artistic patrimony, the French government complained to German diplomats and the MBF. Eager to maintain cordial relations with the Vichy regime,

von Stülpnagel and his staff condemned the confiscations though a series of protests that eventually reached Hitler’s desk, but to no avail. Hitler eventually placed the Einsatzstab Reichsleiter Rosenberg beyond military control and sanctioned the wholesale robbery of Jewish art collections. Conflict with the SS followed a similar pattern. Forced to accept an advisory role at the start of the Occupation, Heinrich Himmler’s

SS highlighted the alleged danger of the so-called ‘Jewish menace’ and pressed military authorities to launch an active campaign against racial opponents in France, but SS forces in France lacked the authority to act independently. After resistance groups shot Colonel Karl Friedrich Hotz in Nantes on 20 October and Dr. Hans-Gottfried Reimers

in Bordeaux on 21-10-1941, Hitler ordered the Otto von Stülpnagel to execute 100-150 French hostages for each attack. The MBF immediately condemned Hitler’s policy through official channels, treated both attacks as a single incident and shot a total of 98 hostages. Determined to preserve French cooperation, von Stülpnagel condemned large-scale executions. In contrast, the SS demonstrated its enthusiasm for Hitler’s war against the so-called Jewish conspiracy by bombing seven Synagogues in Paris on the night of 2/3 October 1941. Embarrassed by the attacks, von Stülpnagel complained to superiors in Berlin, but his repeated protests only reiterated tepid support for Nazi racial policy. Suspecting the MBF of Francophilia, Field Marshal der Infanterie, Wilhelm Keitel

, the head of Armed Forces High Command grew tired of von Stülpnagel’s complaints. On 02-02-1942, he directed the MBF to answer all acts of resistance with “sharp deterrents, including the execution of a large number of imprisoned communists, Jews, or people who carried out previous attacks, and the arrest of at least 1.000 Jews or communists for later evacuation.” Unwilling to carry out mass executions, Otto von Stülpnagel promptly submitted a bitter letter of resignation.

Otto may have suffered a nervous breakdown and spent the remainder of the war with his wife in Berlin. Arrested by Allied authorities after Germany’s surrender, the former MBF wound up in a French military prison. Condemned as a butcher in the press and charged with war crimes by French authorities, Otto von Stülpnagel committed suicide in Cherche Midi Prison on 06-02-1948. von Stülpnagel is buried on the war cemetery of Champigny St André, France,

close to the graves of Waffen SS