the daughter of the General of the infantry Ludwig Freiherr von und zu der Tann-Rathsamhausen.

Carl graduated from high school in Frankfurt in 1904. On 01-10-1904, he entered Darmstadt in the rank of Fahnenjunkers in the 1st Grand Ducal Hessian Infantry (Life Guards) Regiment No. 115 a

and his wife Marie born Steinmetz. He joined the German military straight from school in 1904, and served as a general staff officer in World War I.  At the end of the First World War Stülpnagel was 1st General Staff Officer of the 18th Division at the Westfront.

Stulpnagel was promoted to Hauptmann in 1924 and Major in 1925. He then commanded the 2nd Battalion of the 5th Infantry Regiment based at Neuruppin. In 1933 as an Oberst he was appointed head of the ‘Foreign Armies’ branch of the General Staff of the Army. By 1936 he was a Generalmajor and commanded the 30th Infantry Division, nickname “Briesen Division”

in Lübeck. On 27-08-1937 as a Generalleutnant he was appointed Deputy Chief of the General Staff of the Army. In 1938, the Blomberg-Fritsch Blomberg and Fritsch

Affair and the Sudeten Crisis led to a weakening of Stülpnagel’s enthusiasm for the National Socialist Regime in Germany. It was at that time that he established contact with the Schwarze Kapelle, notably revealing the secret plan for the invasion of Czechoslovakia. The Schwarze Kapelle group

attempted several assassinations on Hitler but the biggest one was on July 20 1944, the assassination is known as Operation Walküre.

he successfully led this army across southern Russia on the Eastern Front. Under Stülpnagel’s command, the 17th Army achieved victory during the Battle of Uman and the Battle of Kiev. Stülpnagel also took part in the military opposition’s first revolutionary plans, aimed at ousting Hitler and the Nazis, but these plans were largely abandoned after the Munich Agreement. Despite his involvement in the military opposition’s plot to assassinate Hitler, substantial archival evidence indicates that during his tenure as commander of the 17th Army and military governor of France, Stülpnagel was involved in war crimes. In Russia, Stülpnagel signed many orders authorizing reprisals against civilians for partisan attacks and closely collaborated with the Einsatzgruppen in their mass executions of Jews. In March 1942, he gave his command to Hermann Hoth

and von Stülpnagel was made German-occupied France ‘s military commander, and in this position, he, along with his personal adviser Oberstlieutnant  Caesar von Hofacker

, was condemned by Jurist, Roland Freisler

and hanged on 20-12-1944, age 48, went forth with their plans to further the cause of ridding Germany of Hitler (see Adolf Hitler).

Hofacker served as Stülpnagel’s liaison with Oberst der Kavallerie, Claus von Stauffenberg who eventually carried out the assassination attempt at the Wolfsschanze in East Prussia. On the day in question, 20-07-1944, Stülpnagel put his part of the plot into operation. This mainly involved having Hans Otfried von Linstow, he was hanged age 45, on 30-08-1944,

who was only informed of the plot on that same day, round up all SS and Gestapo officers in Paris, von Stülpnagel’s brother Otto was called the “butcher of Paris”  and imprisoned them. However, when it became apparent that the assassination attempt in East Prussia had failed, von Stülpnagel was unable to convince Field Marshal der Infanterie, Günther von Kluge, Von Kluge committed suicide age 61, on 19-08-1944, near Metz, to support the uprising and was forced to release his prisoners.

When von Stülpnagel was recalled from Paris, he stopped at Verdun and tried to kill himself by shooting himself in the head with a pistol on the banks of the Meuse River. He only succeeded in blinding himself. While he was in captivity, he reportedly screamed the name “Rommel“ in a delirium. As a result, Erwin Rommel was soon put under surveillance by the SS.

survived the war and died age 79, in 1972. Oberst Finck was sentenced to death by Roland Freisler and executed by hanging the same day 30-08-1944 (aged 44) at the Plötzensee Prison, Berlin 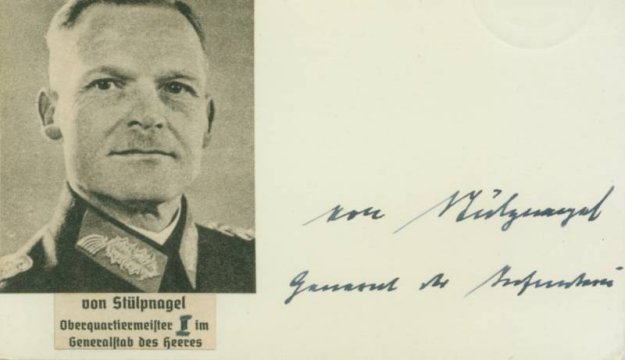 He was found guilty of high treason and age 58, hanged the same day at Plötzensee Prison in Berlin. Von Stulpnagel is buried at the cemetery of the Plötzensee prison in an anonymously grave like all Plötzensee victims. There is a grave of honor on the Hauptfriedhof of Frankfurt am Main with his fellow WWII Generalsmajor der Flieger, Special Duties with Air Fleet Command Reich, Herbert Schröder, Generalmajor der Artillerie, Artillery Commander 141, Friedrich Kunze and Generalleutnant der Panzertruppe, Küstenverteidigungsabschnitts Friesland, der ehemaligen Division zbV. 172, Hans Boelsen.