was a French Radical politician and the Prime Minister of France at the start of World War II. Daladier became Minister of War for the Popular Front coalition in 1936 and after the fall of the Popular Front, he became Prime Minister again on 10-04-1938. His term in power saw the Munich Agreement in room 105 of the Führerbau on the Königsplatz in Munich, when France backed out of its obligations to defend Czechoslovakia against Nazi Germany. Room 105 didn’t change at all, see the fireplace, the room now is a practise room for talented piano players, around the world,

Daladier was pushed into negotiating by Britain’s Neville Chamberlain

without which war would have been inevitable at that time. Unlike Chamberlain, Daladier had no illusions about Hitler’s ultimate goals. In fact, he told the British in a late April 1938 meeting that Adolf Hitler’s real aim was to eventually secure “a domination of the Continent in comparison with which the ambitions of Napoleon were feeble.” discouraged by the pessimistic and defeatist attitudes of both military and civilian members of the French government, as well as traumatized by France’s blood-bath in World War I that he personally witnessed, Daladier ultimately let Chamberlain have his way.

On his return to Paris, Daladier, who was expecting a hostile crowd, was acclaimed. He then commented to his aide, Alexis Léger: “Ah, les cons, the fools!”  When the Molotov-Ribbentrop Pact Viacheslaw Molotov

was signed, Daladier responded to the public outcry by outlawing the French Communist Party, which had refused to condemn Josef  Stalin’s

action. In 1939, after the German invasion of Poland, he was reluctant to go to war, but he did so on 04-09-1939, inaugurating the Phony War. In March 1940, Daladier resigned as Prime Minister in France because of his failure to aid Finland’s defense during the Winter War and he was replaced with Paul Reynaud.

Daladier remained, however, Minister of Defense, and his antipathy to Paul Reynaud prevented Reynaud from replacing Maurice Gamelin 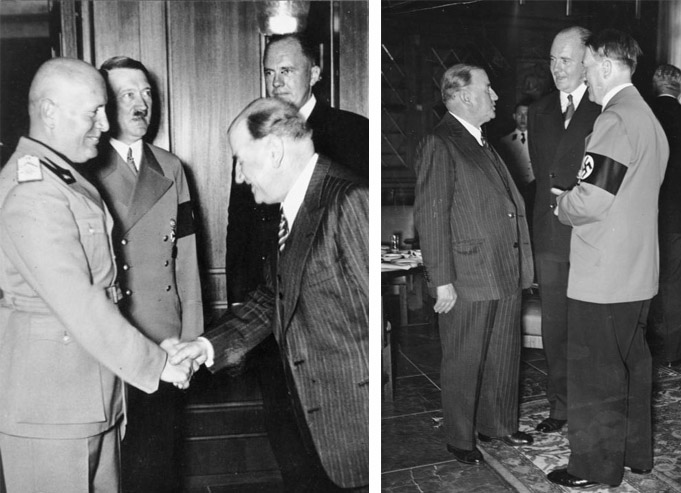 Daladier was kept in prison from 1940 to 1943, after which he was handed out to the Germans and deported to Buchenwald concentration camp in November 1942, until the end of the war. After the war ended, Daladier was a member of the Chamber of Deputies, where he was an opponent of Charles De Gaulle.