graduated from the United States Military Academy at West Point

He was wounded on November 1,

just a few days before the end of hostilities. He remained in Europe for occupation duty, commanding his battalion in Germany, and then serving on the Staffs of the American Expeditionary Force’s General Headquarters and the IX Corps. After the war Morris returned to the United States as an ROTC instructor at Pennsylvania’s Bucknell University. He graduated from the General Staff School at Fort Leavenworth, Kansas in 1925. In 1930 Morris graduated from the Army War College.In 1937 he served with the 66th Infantry Regiment at Fort Benning, Georgia. From 1938 to 1940 Morris served on the Staff of the War Department General Staff in Washington, D.C. During World War II Morris commanded the 6th Armoured Division

during its stateside training, receiving promotion to Brigadier General in January, 1942 and Major General the following May. In 1943 and 1944 he commanded II Armoured Corps. From 1944 to 1945 he was commander of XVIII Corps. In 1945 Morris commanded 10th Armored Division, nickname “Tiger Division”

and played a vital role in the relief the 101 Airborne Division of Bastogne.

saw the fanatical enemy press in from all sides; rocked beneath terrific artillery barrages and repeated bombing; froze in ice-filled foxholes and along the snow-covered slopes; watched supplies and ammunition dwindle. Threatened with extinction, they echoed Major General, Anthony McAuliffe’s reply of “Nuts” to the German surrender ultimatum. Men of the 10th stood, fought, died. Anthony McAuliffe

during the Battle of the Bulge. The “Tiger” nickname of the 10th originates from a division-wide contest held while it was training in the United States, symbolizing the division “clawing and mauling” its way through the enemy. Major General Paul Woolever “Pistol Paul”  Newgarden 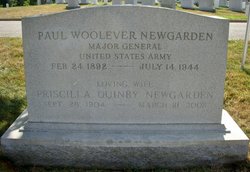 , the division’s first commander selected “Tiger” as the winner because a tiger has soldierly qualities, including being clean and neat and the ability to maneuever and surprise his prey. Paul Newgarden died in a plane crash over Chattanooga, Tennessee while returning to Fort Knox. Casualty figures for the 10th Armored Division, European theater of operations total battle casualties: 4.031 and total deaths in battle: 784. The Battle of the Bulge involved about 610.000 American men, of whom some 89.000 were casualties, including 19.000 killed. It was the largest and bloodiest battle fought by the United States in World War II. During World War II, most U.S. black soldiers still served only as truck drivers

and as stevedores (except for some separate tank, tank destroyer, and artillery battalions as well as in Army Air Force fighter units). In the midst of the Battle of the Bulge, General Ike Eisenhower

was severely short of replacement troops for existing military units which were totally white in composition. Consequently, he made the decision to allow African American soldiers to pick up a weapon and join the white military units to fight in combat for the first time. More than 2.000 black soldiers had volunteered to go to the front.

This was an important step toward a desegregated United States military. A total of 708 African Americans were killed in combat during World War II. After Germany’s surrender, Morris was assigned to command VI Corps. From 1945 to 1948 General Morris served on the War Department Personnel Board in Washington, D.C. In 1949 he was assigned as head of the U.S. Caribbean Command as a Lieutenant General, where he remained until his 1952 retirement. His awards and decorations included the Distinguished Service Cross, Distinguished Service Medal, Silver Star,

Legion of Merit, Bronze Star and Purple Heart. Citation for Distinguished Service Cross: For extraordinary heroism in action near Villers-devant-Dun, France, 01-11-1918. During darkness he led his battalion in an attack under heavy artillery and machine-gun fire. Upon reaching a hill he exposed himself to heavy fire to reconnoitre personally the enemy position, and then, although wounded by a machine-gun bullet, heroically led his battalion in their advance, refusing to be evacuated, inspiring his  men by his personal courage.

Morris retired in Washington D.C where he at the old age of 81 died, on 30-03-1971 and is buried on the National Cemetery of Arlington, Section 5, Grave 47. Close by in Section 5 the graves of the Major General, Provost Marshal, Headquarters, IX Corps, Generals William Abendroth