Admiral French Fleet and served in the pro-German Vichy regime, becoming its deputy leader for a time..

to a family with a long connection with the French Navy. His great-grandfather was killed at the Battle of Trafalgar. His father, Jean-Baptiste Darlan,

was a lawyer and politician who served as Minister of Justice in the cabinet of Jules Méline. Georges Leygues, a political colleague of his father who would spend seven years as Minister of the Marine, was Darlan’s godfather. After graduating from the French naval academy in 1902, he joined the French Navy. During the First World War he commanded a battery of naval guns. Darlan, now Fleet Admiral, held strong anti-British feelings and by 1940 believed that Germany would win the Second World War. He therefore thought it was in the best long-term interests of France to come to an arrangement with Adolf Hitler rather than Sir Winston Churchill.

and he was then named as minister of the navy. After Petain signed the armistice with Nazi Germany,

and the French Resistance who claimed that Darlan was a fascist and a Nazi collaborator. However, the decision was endorsed by Winston Churchill and Franklin Delano Roosevelt who both agreed with Eisenhower that the deal with Darlan would assist military operations in the area.

The 20-year-old Fernand entered Darlan’s headquarters in Algiers and shot the Admiral at point-blank range. Darlan died a few hours later and was replaced as high commissioner by another French flag officer, General Henri Giraud

Giraud died age 70 on 11-03-1949, in Dijon. Ferdinand Bonnier de La Chapelle’s speedy trial and execution have fueled numerous conspiracy theories about who may have been behind the assassination. He was a member of the a member of the resistance group led by the monarchist Henri d’Astier de la Vigerie, he died age 55 on 10-10-1952. 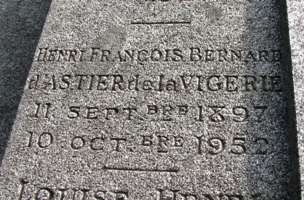 De la Vigeria was a French soldier, Résistance member, and conservative politician, but De La Chapelle declared that he had acted alone and he was condemned to death. He was executed by a firing squad on 26-12-1942, 20 years old. When various people, including Henri d’Astier, appeared to Giraud, just elected, for the grace of Bonnier, it told them it was too late. Bonnier de la Chapelle is executed in Hussein-Dey, the square known as “the shot”. Darlan was unpopular with the Allies, he was considered pompous, having asked Eisenhower to provide 200 Coldstream Guards and Grenadier Guards as an honor company for the commemoration of Napoleon’s victory at Austerlitz. It was said that “no tears were shed” by the British over his death, whose murder removed a potential rival to De Gaulle’s leadership of the Free French.