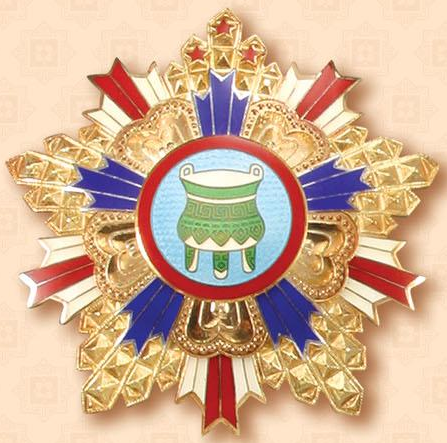 was a political and military leader of 20th century China. He was an influential member of the nationalist party Kuomintang and Sun Yat-sen’s close ally. He became the Commandant of Kuomintang’s Whampoa Military Academy

and took Sun’s place in the party when the latter died in 1925. With the attack on Pearl Harbor and the opening of the Pacific War, China became one of the Allied Powers. During and after World War II, Chiang and his American-educated wife Soong May-ling,

known in the United States as “Madame Chiang”, she died age 105, in 2003, held the support of the United States China Lobby which saw in them the hope of a Christian and democratic China. Chiang was even named the Supreme Commander of Allied forces in the China war zone. He was created a Knight Grand Cross of the Order of the Bath by King George VI of the United Kingdom in 1942. Chiang Kai-shek, Franklin Delano Roosevelt

After the Japanese surrender in 1945, Chiang attempted to eradicate the Communists. Ultimately, with support from the Soviet Union, the CPC defeated the Nationalists, forcing the Nationalist government to retreat to Taiwan, where martial law was continued while the government still tried to take back mainland China. Chiang ruled the island with an iron fist as the President of the Republic of China and Director-General of the Kuomintang.

Feelings towards Chiang are mixed in Taiwan. While some still view him as a hero, others consider him with disdain; subsequently, hundreds of Chiang’s statues have been dismantled across the island.

Chiang Kai Shek died at the old age of 87, on 05-04-1975 and is buried in the tombe in Cihu Presidential Burial Place in Taiwan.