His ashes are scattered but there is a cenotaph on West Point Cemetery Orange County, New York, USA. 329 Washington Road, West Point, NY 10996.

of patrician Yankee stock. His parents were Doctor Benjamin Stilwell and Mary Augusta Peene. Stilwell was an eighth generation descendant of an English colonist who arrived in America in 1638, whose descendants remained in New York up through the birth of Stilwell’s father. Stilwell later taught at West Point,

and attended the Infantry Advanced Course and the Command and General Staff College. During World War I, he was the U.S. Fourth Corps

He was awarded the Distinguished Service Medal

for his service in France. Stilwell is often remembered by his sobriquet, “Vinegar Joe”, which he acquired while a commander at Fort Benning, Georgia. Stilwell often gave harsh critiques of performance in field exercises, and a subordinate – stung by Joe’s caustic remarks – drew a caricature of Stilwell rising out of a vinegar bottle. Just prior to World War II, Stilwell was recognized as the top corps commander in the Army and was initially selected to plan and command the Allied invasion of North Africa. However, when it became necessary to send a senior officer to China to keep that country in the War, Stilwell was selected, over his personal objections, by President Franklin Roosevelt

He became the Chief of Staff to Generalissimo Chiang Kai Shek,

served as the commander of the China Burma India 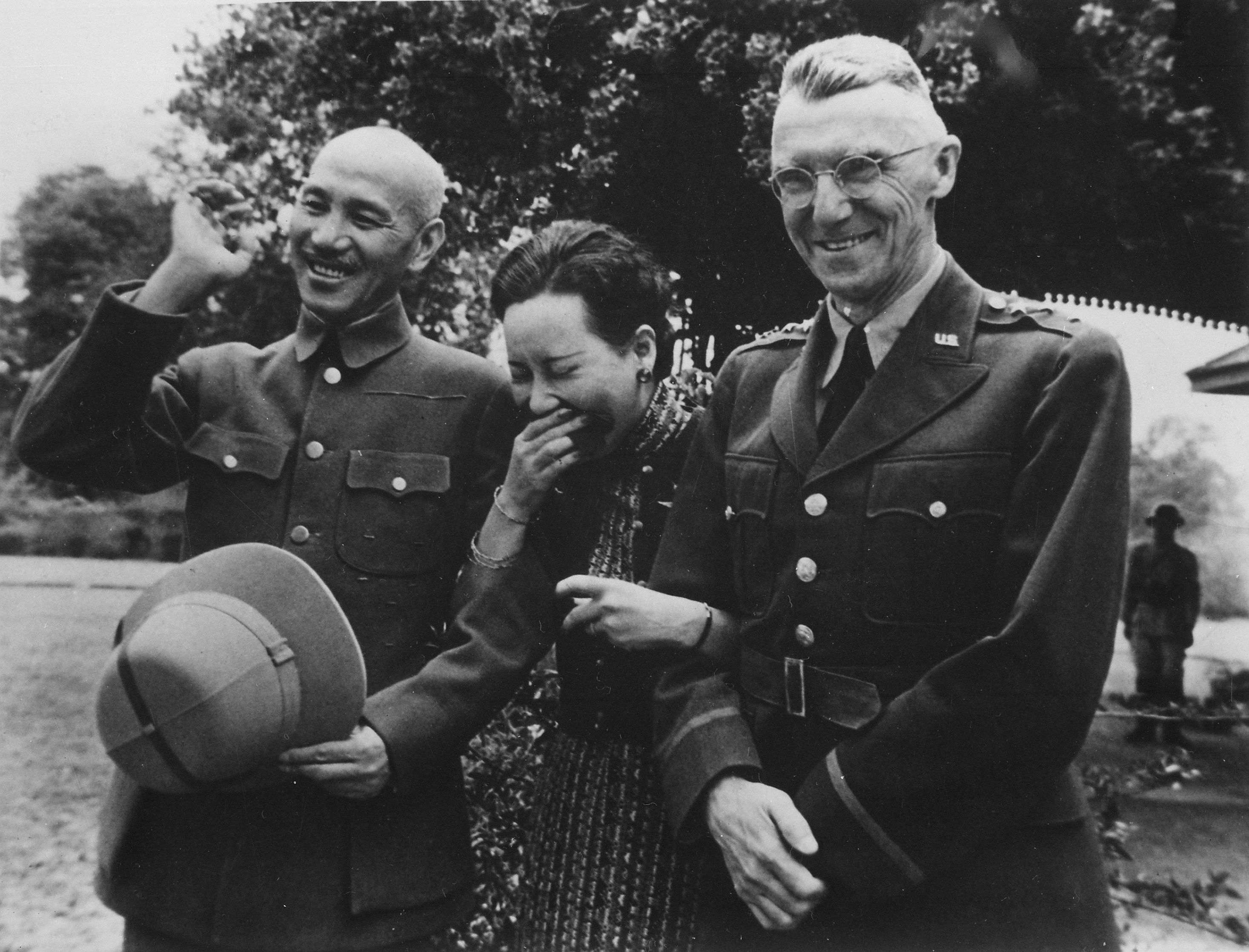 Theater responsible for all Lend-Lease supplies going to China, and later was Deputy Commander of the South East Asia Command. Unfortunately, despite his status and position in China, he soon became embroiled in conflicts over U.S. Lend-Lease aid and Chinese political sectarianism. Stilwell’s assignment in the China-Burma-India Theater was a geographical administrative command on the same level as the commands of Dwight Eisenhower and Douglas MacArthur

.However, unlike other combat theaters, for example the European Theater of Operations, the CBI was never a “theater of operations” and did not have an overall American operational command structure. The China theater came under the operational command of Generalissimo Chiang Kai-Shek, commander of Nationalist Chinese forces, while the Burma India theater came under the operational command of the British. The British and the Chinese were ill-equipped and more often than not on the receiving end of Japanese offensives. Chiang Kai-Shek was interested in conserving his troops and Allied Lend-Lease supplies for use against any sudden Japanese offensive, as well as against Chinese Communist forces in a later civil war.

The Generalissimo’s wariness increased after observing the disastrous Allied performance against the Japanese in Burma. After fighting and resisting the Japanese for five years, many in the Nationalist government felt that it was time for the Allies to assume a greater burden in fighting the war. During his time in India, Stilwell became increasingly disenchanted with British forces, and did not hesitate to voice criticisms of what he viewed as hesitant or cowardly behavior. After Stilwell here with Brigade General Frank Down Merrill

left the defeated Chinese troops that he had been given nominal command by Chiang Kai-shek, Chinese Generals admitted later that they had considered Stilwell as an ‘adviser’ and sometimes took orders directly from Chiang and escaped Burma in 1941, Chiang was outraged by what he saw as Stilwell’s blatant abandonment of his best army without orders and began to question Stilwell’s capability and judgment as a military commander. Chiang was also infuriated at Stilwell’s strict control of U.S. lend lease supplies to China.

But instead of confronting Stilwell or communicating his concerns to Marshall and Roosevelt when they asked Chiang to assess Stilwell’s leadership after the Allied disaster in Burma, Chiang reiterated his “full confidence and trust” in the general while countermanding some orders to Chinese units issued by Stilwell in his capacity as Chief of Staff. An outraged Stilwell began to call Chiang “the little dummy” or “Peanut” in his reports to Washington, while Chiang repeatedly expressed his pent-up grievances against Stilwell for his “recklessness, insubordination, contempt and arrogance” to U.S. envoys to China.

Stilwell died of stomach cancer on 12-10-1946, age 63, at the Presidio of San Francisco, while still on active duty. His ashes were scattered on the Pacific Ocean and a cenotaph was placed at the West Point Cemetery.