united statesArmyGeneralmajor
Casey, Hugh John “Patt”, born on 07-06-1891 in Brooklyn, New York, will always be remembered as General Douglas MacArthur’s chief engineer, because his greatest achievements as an engineer came during his eight years with Douglas MacArthur. Casey started his career in the Army and Corps of Engineers as an underage plebe who entered the US Military Academy during the summer of 1915 and not involved in World War I. The firsthand knowledge of the Philippine topography that Casey gained during his surveys allowed him during World War II to plan and act with a detailed personal knowledge of the terrain.

His second duty, to advise MacArthur, brought Casey into close contact with his future commander and many of the Philippine Army engineers. Casey supervised demolitions as MacArthur’s troops retreated to Bataan. He joined MacArthur and sixteen other members of his staff in their escape from Corregidor by PT boat in March 1942. For the Battle of Leyte Casey’s ASCOM had 43.000 men, of whom 21.000 were engineers. The need to get aircraft based on Leyte

agreed to move his headquarters. Despite enormous difficulties Casey’s ASCOM was able to finish numerous projects on time. On 13-02-1945, ASCOM was transferred to USASOS and redesigned the Luzon Base Section. Casey then resumed his post as Chief Engineer, but remained in Japan as MacArthur’s Chief Engineer until Casey’s retirement, on 31-12-1949. He died of a heart attack, at the old age of 90, on 30-08-1981, at the Veterans Administration Hospital at White River Junction, Vermont. Hugh Casey is buried with his wife Dorothy, born Miller, who died old age of 93 in 1995, and his son Keith, on the Arlington National Cemetery in Section 3. His other son, Hugh, had been killed in an air crash during the Korean War. Father and son were buried adjacent to each other in Arlington National Cemetery. His daughter Patricia, who married Major General Frank Butner Clay,  the son of Lucius Clay, had died on 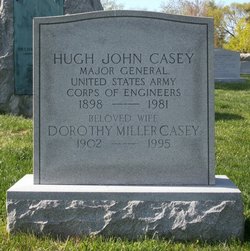