Irena Sendler, born Krzyżanowska, also referred to as Irena Sendlerowa in Poland, nom de guerre “Jolanta”, 15 February 1910  was a Polish nurse and social worker who served in the Polish Underground in German occupied Warsaw during World War II, and was head of the children’s section of Zegta, the Polish Council to Aid Jews, which was active from 1942 to 1945. 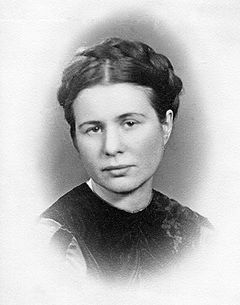 Assisted by some two dozen other Żegota members, Sendler smuggled approximately 2,500 Jewish children out of the Warsaw Ghetto and then provided them with false identity documents and shelter outside the Ghetto, saving those children from the Holocaust.  Irena smuggled the Jewish children out; infants in the bottom of the tool box she carried and older children in a burlap sack she carried in the back of her truck. She also had a dog in the back that she trained to bark when the Nazi soldiers let her in and out of the ghetto. The soldiers wanted nothing to do with the dog.

The German occupiers eventually discovered her activities and she was arrested by the Gestapo, tortured, and sentenced to death, but she managed to evade execution and survive the war. In 1965, Sendler was recognised by the State of Israel as Righteous among the Nations. Late in life she was awarded the Order of the White Eagle, Poland’s highest honour, for her wartime humanitarian efforts.

Irena Sendler lived in Warsaw for the remainder of her life. She died on 12 May 2008, aged 98, and is buried in Warsaw’s Powazki Cemetery.