A nice introduction to the SS. The SS (Stosstrupp Adolf Hitler) was a number of things–Hitler’s body guard, law enforcement duties, concentration camp controllers, and soldiers (the Waffen-SS). This volume examines the work of the SS from 1939-1945. Early on, there was competition between the SA and the SS (to be devoted to Hitler, whereas the SA had other ambitions). With the demise of the SA

became that much more important. The SS had two elements–the Waffen-SS

, the military arm, and the Allgemeine-SS, a police and security force with tentacles throughout German society. The second chapter lays out the variety of responsibilities of the Allgemeine-SS nicely. In addition to describing the “tentacles,” this discussion also considers recruitment and training, symbolism (the death’s head–totenkopf), uniforms, flags, and so on. 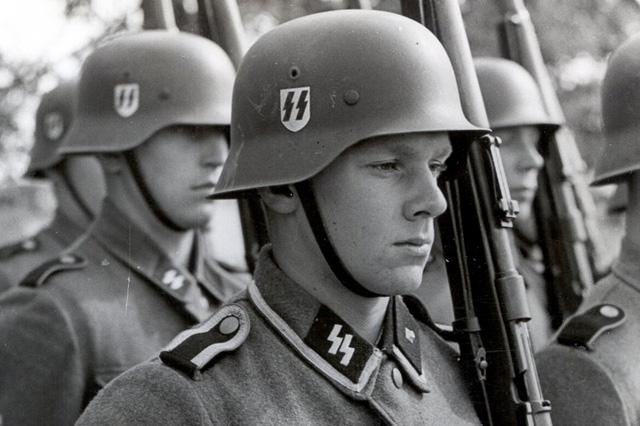 Then, the Waffen-SS. Appearance, equipment, training, weapons, tactics, and famous commanders, such as Sepp Dietrich

. Some of the more legendary divisions in the Waffen-SS: Leibstandarte Adolf Hitler, Das Reich, and Totenkopf. Other formations emerged, too, such as Wiking, a division made up of volunteers from Denmark, the Netherlands, Norway, etc. The racial exclusivity of the Waffen-SS began to be compromised as needs for soldiers became more pressing as the war continued.
Josef “Sepp  Dietrich was a former Army sergeant with a peasant background who commanded the forerunner of the Waffen-SS, the Sonderkommando Berlin. He would  as Oberstgruppenführer, command the Leibstandarte SS Adolf Hitler

from its inception to Regiment, Brigade, and Division. He was then given command of the I SS Panzer Corps Leibstandarte and by the end of the war was the commander of the 6th SS Panzer Army

. The remnants of the army eventually surrendered to the United States Army. Army commander throughout the army’s existence, Dietrich said in early 1945: “We call ourselves the “6th Panzer Army”, because we’ve only got 6 Panzers left”.
Paul “Papa” Hausser

a former General in the regular army, was chosen by Himmler to transform the SS-VT into a credible military organisation. He was the first divisional, as SS Obergruppenführer, commander of the Waffen-SS when the SS-VT was formed into a Division for the Battle of France. He went on to command the II Panzer Corps and the 7th Army

then rose to command the V SS Mountain Corps which fought the Yugoslav Partisans. Phleps and his men were captured and brought in for interrogation.  Phleps’ personal effects, including his identity card, tags and decorations, were found by a Hungarian patrol and handed over to German authorities on 29 September 1944. Phleps had been listed as missing in action since 22 September 1944 when he did not show up for his meeting with Himmler, who had issued a warrant for Phleps’ arrest. He was killed by partisans 21-09-1944 age 62.
Obergruppenführer Felix Steiner,

another former army officer and veteran of World War I. He was given command of the SS Regiment Deutschland. He is credited with the creation of small mobile Battlegroups/ Kampfgruppen. He armed his men with submachine guns and grenades instead of rifles and issued camouflage clothing. He commanded the SS Division Wiking

and the III Germanic SS Panzer Corps.
Casualties.
Total casualties amongst the Waffen-SS will probably never be known. One estimate indicates that they suffered 180,000 dead, 400,000 wounded, and 40,000 missing. World War II casualties indicates that the Waffen-SS suffered 314,000 killed and missing, or 34.9 per cent. By comparison, the United States Army suffered 318,274 killed and missing in all theaters of the war.