The Tuskegee airmen once shot down three German jets in a single day.

The Tuskegee Airmen  is the popular name of a group of African American military pilots (fighter and bomber) who fought in World War II. Officially, they formed the 332nd Fighter Group

and the 477th Bombardment Group

of the United States Army Air Forces. The name also applies to the navigators, bombardiers, mechanics, instructors, crew chiefs, nurses, cooks and other support personnel for the pilots.

The Tuskegee Airmen were the first African-American military aviators in the United States Armed Forces. During World War II, black Americans in many U.S. states were still subject to the Jim Crow

laws and the American military was racially segregated, as was much of the federal government. The Tuskegee Airmen were subjected to discrimination, both within and outside the army. All black military pilots who trained in the United States trained at Moton Field, the Tuskegee Army Air Field, and were educated at  Tuskegees University, located near Tuskegee, Alabama; the group included five Haitians from the Haitians Air Force, Alix Paquet

. There was also one pilot from Port of Spain, Trinidad, Eugene Theodore

March 24, 1944, a fleet of P-51 Mustangs led by Colonel Benjamin O. Davis, commander of the Tuskegee airmen, set out on the longest escort mission their crews would fly during World War II. The 43 fighters were there to help B-17 bombers run a gauntlet of over 1,600 miles into the heart of Hitler’s Germany and back. The bombers’ target, a massive Daimler-Benz tank factory in Berlin, was heavily defended by whatever forces the Luftwaffe could muster at that point in the war. The 25 aircraft protecting the plant included the battle-tested Fw 190 radial propeller fighters, the Me 163 “Komet” rocket-powered plane and the much more formidable Me 262, history’s first jetfighter and the forerunner of today’s modern fighters. While the American P-51s typically lagged behind the Me 163s and 262s, they could outmaneuver them at low speeds. The German planes also tended to run out of fuel more quickly than the Tuskegee airmen’s Mustangs. Making the most of their limited advantages, pilots Charles Brantley, Earl Lane and Roscoe Brown all shot down German jets over Berlin that day, earning the all-black 332nd Fighter Group a Distinguished Unit Citation. 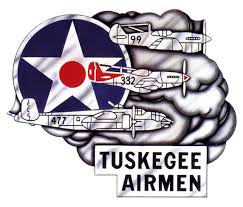 In all, 992 pilots were trained in Tuskegee from 1941 to 1946. 355 were deployed overseas, and 84 lost their lives in accidents or combat.The toll included 68 pilots killed in action or accidents, 12 killed in training and non-combat missions and 32 captured as prisoners of war.

The Bloody Battle for Iwo Jima.