The Joseph and Magda Goebbels children.

The Goebbels children were the five daughters and one son born to Nazi propaganda minister Joseph Goebbels and his wife Magda Goebbels.

The children, born between 1932 and 1940, were murdered by their parents in Berlin on 1 May 1945, the day both parents committed suicide.

from a previous marriage to Günther Quandt.

He was not present when his half-siblings of this family were killed.

Some writers have contended that their names all began with “H” as a tribute to  Adolf Hitler (did you know), but there is no evidence to support this; rather, it supports that Magda’s “H” naming was the idea of her first husband, Günther Quandt who named his other two children after his first wife beginning with “H”.

This claim is supported by Magda’s mother, Auguste Behrend

, who stated that the family made an innocent hobby of searching for new baby names beginning with “H” for each successive child.

Born 1 September 1932. Goebbels was proud of his eldest daughter and would go straight to her cot as soon as he returned from his office, to take her on his lap. Helga was a “daddy’s girl” who preferred her father to her mother. She was reported to have been a lovely baby who never cried and just sat listening uncomprehendingly to the Nazi officials with “her blue eyes sparkling”. It was not unusual for Hitler, who was fond of children, to take her on to his own lap while he talked late into the night. She was photographed with Hilde presenting Hitler with flowers on his birthday 20 April 1936. Helga was always said to be Hitler’s favorite little girl.

Helga was 12 years old when she died. Bruises found on her body postmortem (mostly on her face) led to wide speculation that she had struggled against receiving a cyanide capsule, which was used to kill her by crushing it between her teeth.

Born 13 April 1934, Hildegard was commonly called “Hilde”. In a 1941 diary entry, Joseph referred to her as “a little mouse”. She was photographed with Helga presenting Hitler with flowers on his birthday, 20 April 1936. Hilde was eleven years old at the time of her death

Born 2 October 1935, Helmut was considered sensitive and something of a dreamer. In his diary, Goebbels called him a “clown.” When his teacher at the Lanke primary school reported, to his father’s dismay, that his promotion to a higher form was doubtful, he responded so well to intense tutoring from his mother and his governess that he not only achieved promotion, but excellent marks. He wore braces on his teeth.

Hitler’s secretary Traudl Junge stated that, while the family were in the Führerbunker on 30 April 1945, they heard the sound of Hitler’s self-inflicted gunshot. Helmut, who mistakenly took it for the sound of a mortar  landing nearby, shouted, “That was a bullseye!” Helmut was nine years old at the time of his death.

Born 2 October 1935, Helmut was considered sensitive and something of a dreamer. In his diary, Goebbels called him a “clown.” When his teacher at the Lanke primary school reported, to his father’s dismay, that his promotion to a higher form was doubtful, he responded so well to intense tutoring from his mother and his governess that he not only achieved promotion, but excellent marks. He wore braces on his teeth.

Born 19 February 1937. It is claimed that Holde got her name when the doctor who delivered her, Stoeckel, bent over her and exclaimed “Das ist eine Holde!” (“that’s a pretty one!”) Meissner claims that Holde was the “least lively” of the children and was somewhat “pushed aside” by the others to her considerable distress. He claims Goebbels responded to this by making her something of a favorite, to which she responded with devotion. She was eight years old at the time of her death.

Born 5 May 1938, she was commonly called “Hedda”. She had insisted, in 1944, that when she grew up she was going to marry SS Hauptsturmführer Adjutant Günther Schwägemann

, having been captivated by the fact he had a fake eye. She was six years old, four days shy of her seventh birthday, at the time of her death. After the war Schwägermann was taken into custody and held in American captivity from 25 June 1945 until 24 April 1947. Later in life, Schwägermann lived in northern Germany. 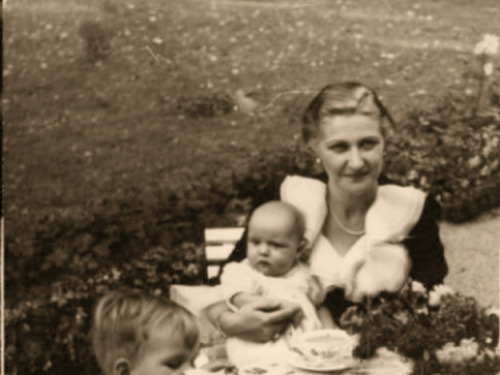 the radioman and last bunker survivor, described her as a “little flirt” and said she frequently joked with him in the bunker. “Heide” was four years old at the time of her death.

Berlin, the end of April 1945, the Reich Chancellery. Hitler’s bunker, deep underground beneath the Chancellery, is a place of gray concrete, narrow passageways, iron doors and cold light. It isn’t a welcoming place, particularly not for children who, only a few weeks earlier, were living a seemingly carefree and innocent life, playing with cats and dogs on a farm far away from Berlin.

On April 30, at about 3:30 p.m., Hitler shoots himself in the head, and his companion Eva Braun dies with him. The double suicide is a signal for the others. By the next day, the six Goebbels children are also dead. SS Obersturmbannführer Dr Ludwig Stumpfegger,

give the children something “sweetened” to drink.and to render them unconscious, they are poisoned with cyanide, a substance that causes rapid death by suffocation.

Six dead children, and yet the act was never punished. Astonishingly, no historian has ever truly delved into this tragic crime, which was part of the final act of the Third Reich. To this day, the episode remains the subject of speculation and misinterpretation.

Before committing the terrible deed of taking the lives of her own offspring, she confided in her sister-in-law that, “In the days to come Joseph will be regarded as one of the greatest criminals Germany has ever produced. The children will hear that daily, people would torment them, despise and humiliate them. We will take them with us, they are too good, too lovely for the world which lies ahead”.