was a highly decorated Generalleutnant in the Wehrmacht during World War II. He was also a recipient of the Knight’s Cross of the Iron Cross

. The Knight’s Cross of the Iron Cross was awarded to recognize extreme battlefield bravery or successful military leadership. Richard Zimmer, in 1943 commander of the  17th Infanterie Division

succeeding Generalleutnant Gustav Adolf von Zangen, the German authorities declared that  patients of the mental institution in the town of  Warta, were killed by the soldiers of the 17th Division in the hospital and dressed in hospital pyjamas, were victims of a common crime rather than a war crime or a murder. In addition to that, the Leibstandarte regiment attached to the 17th Division was notorious for burning all villages it passed through in Poland. General von Zangen

survived the war and died 01-05-1964, age 71 in Hanau.
Zimmer was involved in the big battles, the invasion of Poland, Battle of France, Operation Barbarossa, Battle of Uman, against  Commanding Officer of the 4th Guards Army

At the end of the war, the Fourth Guards Army was part of the 3rd Ukrainian Front

. Biryuzov and 32 others were killed when their Ilyushin IL-18 crashed against mount Avala near Belgrade. The urn containing his ashes is buried in the Kremlin Wall. Zimmer was also in the Battle of Kiev (1941), Battle of Rostov (1941) and the Battle of the Caucasus and the Lower Dnieper Offensive. During Operation Barbarossa from the 91.000 German POWs taken at Stalingrad, 27.000 died within weeks and only 5-6,000 returned to Germany by 1955, after intervention by Chancellor, Konrad Adenauer.

The remainder of the POWs died in Soviet captivity. On 02-02-1943, the organized resistance of Axis troops in Stalingrad ceased. Out of the 91.000 prisoners taken by the Soviets, 3.000 were Romanian. These were the survivors of the 20th Infantry Division

and “Colonel Voicu” Detachment. According to archival figures, the Red Army suffered a total of 1.129.619 total casualties; 478.741 men killed or missing and 650.878 wounded. These numbers are for the whole Don region; in the city itself 750.000 were killed, captured, or wounded. Anywhere from 25.000 to 40.000 Soviet civilians died in Stalingrad and its suburbs during a single week of aerial bombing by Luftflotte 4 as the German 4th Panzer and 6th Armies approached the city; the total number of civilians killed in the regions outside the city is unknown. In all, the battle resulted in an estimated total of 1.7-2 million Axis and Soviet casualties. 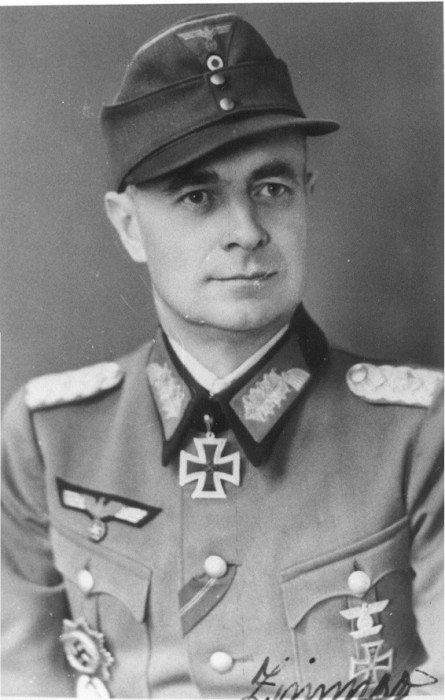 After the war Richard Zimmer lived in Mittenwald, Bavaria and died there at the age of 77, on 20-06-1971. Zimmer is buried, with his wife Else, on the Stadtfriedhof of Mittenwald, only steps of the grave of the Generalfeldmarschall der Gebirgstruppe, Kommandeur der XXXX Panzerkorps, Ferdinand Schörner