War Cemetery Cherntsy in Russia, Row 1-Grave 3 and there is a grave of honour in München, on the Waldfriedhof.

the son of Louis Sr Tronnier, and Auguste Tronnier, born Züchner, a secretary of the Chamber of Commerce in Braunschweig, joined the Prussian Military Service on 06-06-1915, age 17, with the 17th Braunschweigische Husaren Regiment

. Promoted to Leutnant on 27-01-1918 and received for his war efforts both the Iron Crosses

with SA-men and young policemen. They did terrible, irregular things to Hitler enemies in the first months of Hitlers government. In 1935 or 1936 he went to the Wehrmacht where he had a very quick career, even to the grade of Generalmajor in 1944.
He was assigned as Company Chief of the 17th Infantry Regiment under then Oberst, Friedrich Bayer  who would be his neighbor on their cemetery of Cherntsy and promoted to Major on 01-04-1937.

Tronnier was now appointed as teacher of the war school in Wiener Neustadt from 10-11-1938, one day after the Kristallnacht also referred to as the Night of Broken Glass, or Reichskristallnacht, which was a pogrom, a series of coordinated attacks, against Jews throughout Nazi Germany and Austria on 9–10 November 1938, carried out by SA paramilitary forces and non-Jewish civilians. German authorities looked on without intervening. The name Kristallnacht comes from the shards of broken glass that littered the streets after Jewish-owned stores, buildings, and synagogues had their windows smashed.

With the mobilization of World War II his school was closed. Mid September 1939 assigned as commander of the II Battalion of the 289th Infantry Regiment and promoted to Oberstleutnant from 01-12-1939 and involved with his regiment on the Western Front. At the end of spring 1940 he led his battalion together with the 98th Infantry Division

under then Oberst, Herbert Stimmel

, in the battle against France. Tronnier’s regiment was retreated and transferred to the Eastern Front in August 1940 and he assigned as commander of the 70th Infantry Regiment, where he succeeded Generalleutnant, Rudolf Habenicht

who died old age 90 on 09-05-1980 in Düsseldorf. Tronnier was involved in the Battle of France and Operation Barbarossa, later the Battle of Kiev (1941), the Battle of the Caucasus and the Dnieper–Carpathian Offensive. On 28-02-1942 he was awarded with the German Cross in Gold

and promoted to Oberst on 01-03-1942. From September 1942 he with his regiment and together with the 111th Infantry Division 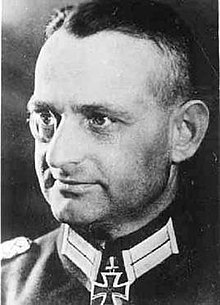 , was put into action with an attack in the Kaukasus. Recknagel was shot by partisans, age 52, on 23-01-1945. Mid October Tronnier’s regiment changed of name and became the 70th Grenadier Regiment with Tronnier as commander. He was awarded with the Iron Cross of the Iron Cross on 28-11-1942 and in December fighting in the region of Terek Ufer and at the end of December fighting in the region of Kurban. End 1942 Tronnier landed in the Führer Reserve. Appointed again as commander on 15-01-1944, now of the 123rd Infantry Division,

where he succeeded Generalleutnant Erwin Rauch

and when this division was disbanded in March 1944, he became the command of the Korps-Abteilung F. Erwin Rauch was captured by American troops in September 1944 after the fall of Brest, survived the war and died age 79, on 26-02-1969, in Kirchenlamitz. A new rename of his corps and Tronnier, became commander of the 62nd Infantry Division

in the region of Bessarabien. Mid August ’44 he landed with his division in the disaster in Romania and Louis Tronnier was captured by Soviet forces during the second Jassy Kishinev Offensive, in August 1944.

died on 27-01-1952, age 54, at Woikowo prisoner of war camp near Moscow. There is a grave of honour in München, on the Waldfriedhof, but Tronnier is buried on the special General cemetery of Cherntsy, where thirty Generals found their rest, among them four Japanese Generals, Nogutschi, Tahasi, Karasawa and Siena, who all died more than ten years after the end of the war. Peter Bracke from Belgium reported me that he bought the coat of General Tronnier on a German auction house. And a German collector from Stuttgart bought the white summer tunic from the east of General Tronnier and kindly sent a photo of it.