was graduated from the U.S. Naval Academy

with the class of 1916 and served in the battleship Pennsylvania during World War I. He advancing to Captain and the post of Operations Office of Destroyer Command, Battle Forces, United States Fleet, by the outbreak of World War II. In 1942-43, Captain Fechteler served in the Bureau of Navigation, then commanded the battleship Indiana

in the Pacific.  Promoted to the rank of Rear Admiral

in early 1944, he was Commander of the Seventh Fleet’s

Amphibious Group 8 from August 1944 to March 1945, participating in landings at Morotai, Leyte, Lingayen and elsewhere in the Philippines.

The Battle of Leyte in the Pacific campaign of World War II was the invasion and conquest of Leyte in the Philippines by American and Filipino guerrilla forces under the command of General Douglas MacArthur. He spent the rest of 1945 as Assistant Chief of Naval Personnel, in Washington, D.C., followed by service as Commander, Battleships & Cruisers, Atlantic Fleet.

He died on 04-07-1967, age 71, at Bethesda Naval Hospital and was buried with his wife Goldey, born Stevens, who died age 75 in 1975, in Section 2 of Arlington National Cemetery. Close by in Section 2, the graves of the General, Commander 92nd “ Negro Division” 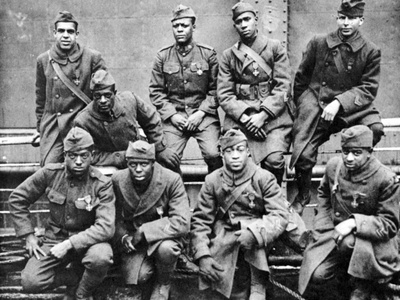 The 92nd Infantry Division was a part of the 5th Army that served in the Italian Theater during World War II.  It was also the only infantry unit comprised entirely of African Americans, or, as they were referred to at the time – Colored Troops, to see combat in Europe.  During their time in Italy, from August of 1944 through the end of the war in May 1945, the 92nd advanced more than 3.000 square miles and captured more than 20.000 German prisoners.  They also suffered heavy casualties – with more than a quarter of the unit killed or wounded in action.  For their Deeds the 92n earned more than 12,000 decorations and citations – including two Medals of Honor.
Also buried here Major General, Commander 8th Bomber Command Europe