The 13th Airborne Division was an airborne formation in the United States Army during World War II, It was officially activated in August 1943 at Fort Bragg in North Carolina, remaining active until February 1946, but never saw combat. In 1944 assigned as the Chief of Airborne Section, 12th Army Group

under the 3* General Omar “Brad” Bradley. Soon after he became the Deputy Chief of Staff 1st Allied Airborne Army

who died age 73, on 16-09-1972, as the last commander of the famous 101st Airborne Division, which had famous commanders as Maxwell Taylor, William “Bill” Lee, and Anthony McAuliffe. The 101st Airborne arrived in England, 15-09-1943, and received additional training in Berkshire and Wiltshire. On 06-06-1944, the Division was dropped into Normandy behind Utah Beach. Against fierce resistance it took Pouppeville, Vierville, and St. Come du Mont. On the 12th, the stronghold of Carentan fell, and after mopping up and maintaining its positions, the Division returned to England, 13 July, for rest and training. On 17 September 1944, taking part in one of the largest of airborne invasions, the 101st landed in Holland, took Veghel and held the Son bridge. St. Oedenrode and Eindhoven fell after sharp fighting on the 17th and 18th. Opheusden changed hands in a shifting struggle, but the enemy was finally forced to withdraw, 9 October. After extensive patrols, the Division returned to France, 28 November, for further training. On 18 December, it moved to Belgium to stop the German breakthrough. Moving into Bastogne under the acting command of Brigadier General, Anthony C. McAuliffe, it set up a circular defence and although completely surrounded, refused to surrender on 22 December. Its perimeter held against violent attacks. The 4th Armoured Division finally reached the 101st on the 26th and the enemy offensive was blunted. Very heavy fighting continued near Bastogne for the rest of December and January. 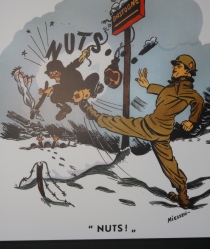 On 17-01-1945, the Division moved to Drulingen and Pfaffenhoffen in Alsace and engaged in defensive harassing patrols along the Moder River. On 31 January, it crossed the Moder in a three-company raid. After assembling at Mourmelon, France, 26-02-1945, for training, it moved to the Ruhr pocket, 31 March, patrolling and raiding in April and engaging in military government at Rheydt and Munchen-Gladbach. The 101st “Screaming Eagles”

, center, as Brigadier General, Stuart Cutler extends his hand in greeting. He is arriving for the Potsdam Conference. Stuart Cutler retired from the Service in 1946 and he died old age 90, on 25-06-1986 and is buried on Arlington National Cemetery Section 31.