began his pilot training, on 07-04-1931, at the Deutsche Verkehrfliegerschule, German Air Transport School, at Schleißheim. The course he and 29 other trainees attended was called Kameradschaft 31, abbreviated “K 31”. With the outbreak of the Spanish Civil War, Trautloft was one of six pilots, of Hermann Goering’s  (did you know) Luftwaffe, sent aboard the Ursaramo to Cadiz to secretly aid General  Bahamond Franco.

With them, the pilots had six crated Heinkel

He 51 biplane fighters. Trautloft had the green heart symbolizing Thüringen painted on his plane. This symbol would later be the symbol of Jagdgeschwader 4

once he assumed command. Following his service in Spain, Trautloft held various Staffelkapitän positions, and at the outbreak of World War II on 01-09-1939 he was the commander of 2./Jagdgeschwader 77, nickname “Herz As”

. The pilots of JG 77 saw plenty of action; they were ultimately responsible for 4.046 victories and 86 aces with 21 of those gaining triple digit claims by war’s end. Two notable airmen are Heinz Bär 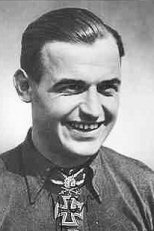 (Bär’s rival) who was the first in the world to reach 150 victories. Bär died age 43, on 28-04-1957. Trautloft commanded this squadron during the Invasion of Poland, in which he got one victory. Trautloft was promoted to Hauptmann and appointed Gruppenkommandeur of I./JG 20 on 19 September. Trautloft got a further two victories during the Battle of France in May 1940. On 4 July I./JG 20

was redesignated III./JG 51. During the Battle of Britain (see Bomber Harris)

Trautloft got a further two victories with JG 51, bringing his total to 10. In late August it was becoming apparent to the German High Command that the battle of Britain was not going as planned. A frustrated Goering (see Goering Peter)

was given command of JG 26, nickname “Schlageter”

on 22 August and Trautloft was given command of JG 54 on 25 August and promoted to Major. Trautloft flew over 120 combat sorties over the English Channel with JG 54, nickname “Grünherz”

and the Geschwader earned a positive reputation among the German bomber crews. During this period Trautloft scored three more victories, bringing his total to 13. In 1941 the Geschwader saw action in the East. First JG 54 took part in the Balkans Campaign, then Operation Barbarossa,

the invasion of the Soviet Union on 22 June. Although Luftwaffe documentation were destroyed at the end of the war surviving records indicate JG 54 lost 491 pilots killed in action and 242 pilots missing. A further 322 pilots were wounded in action. The ground personnel lost 570 killed. Total losses in aircraft were approximately 1071 Bf 109 and 746 FW 190. On 27 June Trautloft was awarded the Ritterkreuz for 20 confirmed victories and outstanding leadership. On 4 December Trautloft ordered that all the aircraft of JG 54 would wear the Green Heart symbol of Thüringen that he himself had on his aircraft in Spain.

From this date forth JG 54 became known as the Grünherz-Geschwader. During 1942 and 1943 Trautloft proved a popular leader, and his tally rose to 58. On 06-07- 1943 Trautloft was appointed as Jagdflieger Inspizient Ost, serving with the General der Jagdflieger office. This position put him in overall charge as Inspector of all the Fighter aircraft units fighting on the Eastern Front. In November he became Inspekteur der Tagjäger, giving him overall responsibilities for all day-fighters. In early 1945 Trautloft joined other high-ranking pilots in the “Fighter Pilots Revolt”, protesting the squandering of the precious Luftwaffe fighters and pilots in high-loss operations like Operation Bodenplatte. Following this revolt Trautloft was relieved of his position and sent to command the 4th Pilot School Division, in Strassburg. He spent the remainder of the war there. Trautloft ended the war as an Oberst. After the war Trautloft joined the new Bundesluftwaffe on 01-10-1957, now with the rank of Brigade General. He served throughout the 1960s as deputy Inspector General of the Bundesluftwaffe, and retired in 1970 as a Generalleutnant.

Squadron commodore Johannes Trautloft (left) and others with Wolfgang Falck (right) in Russia on the Eastern Front, late summer 1942

He was an active member of many veteran organizations until his death on 12-01-1995, old age of 83, at Bad Wiessee and is buried with his wife Marga, born Mayser, who died age 84, on 04-06-1998, on the Waldfriedhof Solln in Munich. Only steps away the graves of SA Leader, Franz Pfeffer von Salomon, General der Panzertruppe, Dietrich von Saucken and Generalfeldmarschall Wilhelm List