the son of Gordon Henry Decker (1878–1953) and his wife Mary McMillan born Napier Decker (1872–1942). George was commissioned a second Lieutenant of infantry in June 1924 and began his Army service with the 26th Infantry Regiment. In 1936, he was sent to the Command and General Staff School at Fort Leavenworth, from which he graduated in 1937. Subsequently, he served with the 10th Infantry Regiment at Fort Thomas, Kentucky and Fort McClellan, Alabama, and the 9th Infantry Regiment

at Fort Bragg, North Carolina. In 1940 he took command of Headquarters Company, I Corps, at Fort Jackson, South Carolina and was assistant supply and logistics officer, 1940–1941. In 1941 came a flurry of promotions: to temporary Major, permanent Major, and temporary Lieutenant Colonel. He was sent to Washington, D.C. to serve on the War Department General Staff, where he was assigned to the Office of the Assistant Chief of Staff for Supply.

, a position he held through the end of World War II. He had been promoted to temporary Brigadier General in August 1944 and Major General in June 1945 and participated in Sixth Army operations in New Guinea, the Solomon Islands and the Philippines. General Decker’s awards and decorations included the Distinguished Service Medal, with one Oak Leaf Cluster, the Silver Star, the Legion of Merit and the Bronze Star. In August 1959 he was appointed Vice Chief of Staff of the US Army and in October 1960 he succeeded Lyman Louis Lyman Lemnitzer as Chief of Staff. At the expiration of his term in October 1962, he retired from the Army. 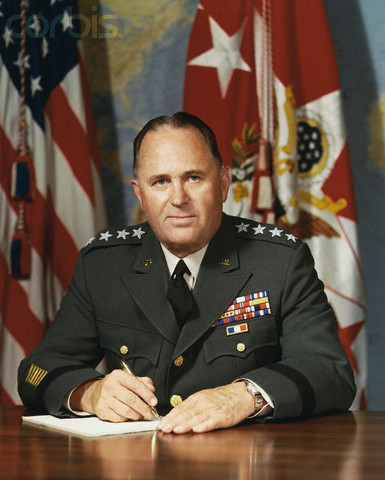 General George Decker died at the age of 77 in Washington D.C, on 06-02-1980 and is buried with his wife Helen, born Inman, who died very old age 97, in 1996, on Arlington Cemetery in Section 7. Close by in Section 7, Air Corps Lieutenant General, Head of the American Air Force, Frank Andrews. Close by in Section 7, the Major General, Commander 35th Division, Paul Baade, First Allied Airborne Army