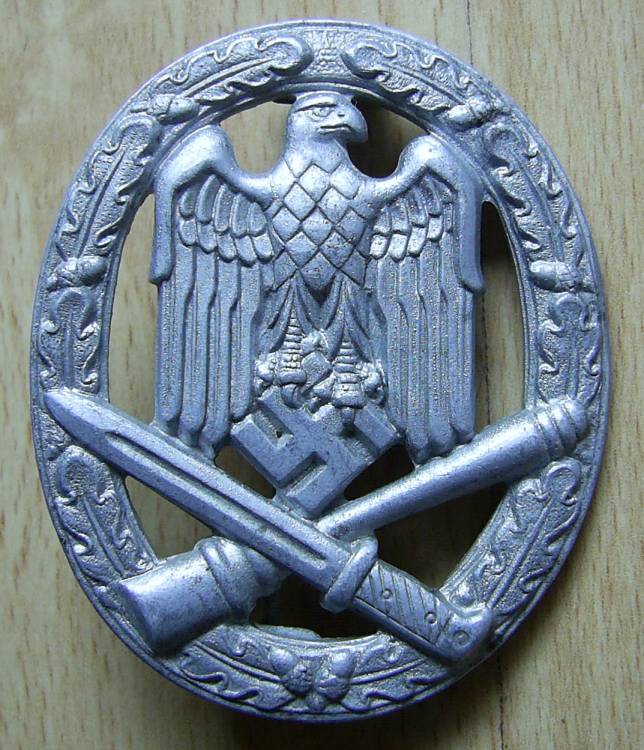 and became an SS Untersturmführer

. He was awarded the Knight’s Cross of the Iron Cross

, which was awarded to recognize extreme battlefield bravery or successful military leadership by Nazi Germany during World War II. He was also one of only 631 men to be awarded the very rare Close Combat Clasp in Gold.

Kämpfe commanded the 3rd battalion of the SS-Panzergrenadierregiments 4 “Der Führer” on the eastern front.In the spring of 1944, the Das Reich division was withdrawn from the Russian front, and transferred to southern France to re-equip and prepare for the possible coming Allied invasion of Normandy. In order to fight the Allies landing troops, the division had to bridge a 700 km road to the north. On 08-06-1944 parts of the division reached the town of Tulle, in the days before the French resistance had killed dozens of German soldiers. In retaliation, 99 French were hanged on 09-06-1944. Because of these acts of sabotage, Kämpfe was ordered to start operations against the Maquis, which, according to German intelligence, was active in the southern highlands of central France.
Helmut Kämpfe, the commander of the III. Battalion, 4th SS Panzer Grenadier Regiment Der Führer, 2nd SS Panzer Division “Das Reich”

, under SS Brigadeführer Heinz Lammerding, was captured by the French Resistance on 09-06-1944 by a group headed by Jean Canou. Canou then placed him in the custody of Georges Guingouin. Guingouin died old age 91, on 27-10-2005.

Lammerding.      Guingouin.
The following day Kämpfe was executed on the orders of Guingouin and his body was burned. When it was clear that Kämpfe had been kidnapped, the Germans sent out forces to try to locate him. Among these was a unit under the command of SS Sturmbannführer, Adolf Diekmann

during 111 weeks of combat, destroying 1.730 tanks and assault guns, for the loss of 500 panzers On June 10, Diekmann was given information regarding Kämpfe by two members of the Milice,

the French secret police that collaborated with the German Gestapo

. Allegedly, French resistance fighters in Oradour-sur-Vayres were planning to execute Kämpfe by ceremoniously burning him alive that day. Kämpfe was the highest ranking officer ever to be captured by the resistance. His execution was to be a big event. That same day, Diekmann’s battalion went mistakenly to nearby Oradour-sur-Glane and massacred most of its inhabitants. They killed a total of 642 men, women and children and destroyed the entire village without any reason for their action to the inhabitants and to this day there is no universally accepted explanation for the massacre.

The massacre was, according to Diekmann’s superior, Brigadeführer Heinz Lammerding, an act outside of his order and would therefore have subjected Diekmann to a court martial if he had survived the following battles in Normandy. Sturmbannführer Otto Erich Kahn was, one of the SS officers who carried out the massacre in Oradour

Kahn lived undisturbed inOttmarsbocholt till his death, age 69, in 1977. The 2nd SS Panzer Division “Das Reich” was honored with 69 Knight Crosses, 151 German Crosses in Gold and 29 Honor Roll Clasp recipients. It also boasted three Swords and 10 Oak Leaves to the Knight’s Cross holders. Cumulatively, more high award-winners served in its ranks than any other division in the Waffen–SS. A two volume history encompassing in detail the Division’s German Cross in Gold, Roll of Honor Clasp, and Close Combat Clasp in Gold holders has been published. Its Panzer Regiment collected 20 Knight’s Crosses and 17 German Cross in Gold during 111 weeks of combat, destroying 1.730 tanks and assault guns, for the loss of 500 panzers. The unit destroyed more than 3.000 enemy tanks in the course of its combat history, more than any other German field division. The official five volume text history of the Division was written by former Regiment “Der Führer” commander of Otto Kahn, SS Obersturmbannführer, Otto Weidinger

as well as a history of his own Regiment for which he was the last wartime commander. n 1953. After the war Brigadeführer Heinz Lammerding was captured by the British and tried for war crimes for the massacre of Tulle and Oradour sur Glane and sentenced to death in absentia by the court of Bordeaux, but he wasn’t extradited by West Germany. He resumed his career as a civil engineer in Düsseldorf until his retirement and died of cancer at the age of sixty-six on 13-01-1971. Obersturmführer Heinz Barth “the butcher of Oradour”

was the only Nazi officer involved in the Oradour massacre to have been judged, in 1983 in East Germany. Awarded a “war victim” pension in 1991 (which would later become a wide-ranging controversy and would lead to changes in German law regarding war or disability pensions for World War II war criminals) by the reunified German government, he was released in 1997, reportedly in consideration of his age and health and for having “expressed remorse”. Ten years later Heinz Barth died of cancer, age 86, unpunished, on 06-08-2007, in Gransee. Helmut Kämpfe is buried on the war cemetery of Berneuil, France. Block 1 Row 6 Grave 176.