, on the family farm of Charles Cooke Sr., a local attorney who later became mayor and American attorney, and his wife Sarah Bleecker Luce; he had five siblings. Nicknamed “Chob,” he graduated from Fort Smith High School at age sixteen. He attended the University of Arkansas (UA) in Fayetteville, Washington County, and received his BS in less than two years (1905), and excelled in mathematics.In 1906, after receiving a degree from the University of Arkansas, he entered the United States Naval Academy, graduating second in the Class of 1910. Between then and 1913, during which time he was commissioned Ensign, Cooke served in the battleships Connecticut, Maine and Alabama. He then received submarine instruction and, as a Lieutenant, took command of the submarine E-2. In 1916–1918, he was assigned to shipyard inspection duty at Quincy.
After communicating with his maternal great-uncle, Vice Admiral Stephen Bleecker Luce,

who founded the US Naval War College,

Cooke entered the US Naval Academy in Annapolis, Maryland, in 1906. He played baseball and was president of the Midshipmen’s Athletic Association. second in his class of 132 in 1910. Fellow midshipmen labeled Cooke “Savvy” because of his scholastic talent combined with sensitivity and rational thinking, traits that constantly emerged throughout his life. Cooke’s early assignments found him on the battleships USS Connecticut, USS Maine, and USS Alabama, after which he enlisted and was admitted to submarine school in 1913. Before reporting, Cooke married Helena Leslie Temple, of an affluent family from Philadelphia, Pennsylvania, on April 30. They had two daughters. However, Cooke’s wife committed suicide on 17-10-1917, and his eldest daughter died in 1921. During these difficult years, Cooke’s parents lent a hand and raised the girls at Fort Smith.
Cooke’s submarine career advanced with promotions and assignments for submarines K-Two, E-Two, R-Two, and S-Five, as well as submarine tender (a ship that supplies and supports submarines) USS Rainbow

. Aboard the submarine USS Ozark (BM-7) — formerly USS Arkansas (M-7) — docked at the Brooklyn Navy Yard, its submarine, the E-Two, exploded from an experimental battery of hydrogen vapors, killing five and injuring nine. Cooke led the rescue of his wounded crew. He spent the next two years at the Fore River Shipyard in Quincy, Massachusetts, inspecting machinery and overseeing the production of more than twenty submarines later used during World War I.
In 1921, Cooke married Mary Louis Cooper MacMillan, a reporter in Honolulu, Hawaii. They had three children. They ended up in Sonoma, California, where Cooke built a stone farmhouse in 1941.
Served as commanding officer of the Submarine “USS S-5”,

which sank during a training exercise in September 1920. He was responsible for saving lives of 37 fellow crewman trapped in wreck. During crash dive tests on 01-09-1920, in Delaware Bay, an air intake valve was left open, submerging the submarine. Cooke drove out the ballast tanks, leaving the submarine’s nose to the bottom, but lifting the stern into the air. Using available tools, the crew worked in shifts to cut through the three-quarter-inch steel hull and open a small hole used to call for help; the entire crew was rescued. Then he was serving as commanding officer of the battleship “USS Pennsylvania”

when the Japanese attacked Pearl Harbour on 07-12-1941. When Japan attacked on 07 December 1941, Pennsylvania, flagship of the United States Fleet, was in drydock at the Pearl Harbor Navy Yard. Her relatively light damage was repaired over the next few months, and she operated along the U.S. west coast and off Hawaii until October 1942. Following an overhaul that significantly updated her secondary battery of 5″ guns and added many anti-aircraft machine guns, Pennsylvania went to Alaskan waters, where she participated in the recapture of Attu in May 1943 and Kiska in August.
President Franklin Delano Roosevelt

proclaimed “a date which will live in infamy”. Promoted to Rear Admiral, he was assigned to Staff of Admiral Ernst King

during World War II. He later served as Chief of Naval Plans, Advocate for Naval Management of War in Pacific, and worked on the transition from a battleship oriented navy to aircraft carrier battle groups. He was present on Omaha Beach during the June 6, 1944 D-Day Invasion.

Attained rank of Admiral and commanded the Pacific Fleet after the end of the war. He served as Naval consultant to General Shiang Kai Shek  of Nationalist China before he retired.

Admiral Charles M. Cooke, Jr, retired at the beginning of May 1948 and subsequently made his home in Sonoma County, California, where he, at the old age of 84 died, on 24-12-1970. He is buried with his wife Mary Louise, born Cooper, who died age 89, in 1975, on Arlington National Cemetery, in Section 8. 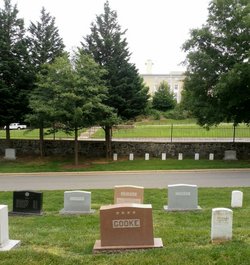