served with the 322nd Infantry Division in France during World War I. With the 322nd Infantry Division in the occupancy of the St. Die sector, the Vosges and on to Verdun. He fought as a Lieutenant Colonel in the bitter actions east of the Somedian Sector and in the Meuse Argonne. During World War II he served as Commanding General of the Thirty-Fifth Division. He held the Distinguished Service Medal, the Silver Star with Oak Leaf Cluster, the Legion of Merit, the Bronze Star with two Oak Leaf Clusters and the Purple Heart. AS Commander of the 35th Division, nickname “Santa Fe”

his division landed on Omaha Beach on 08-07-1944, former commander was William Hood “Bill” Simpson. Total casualities of the Santa Fe Division during the European campaign, 7.296, KIA 1.018 ; WIA 6.278. During World War I, Battery D of the 129th Field Artillery Regiment had, as a battery commander, Captain Harry Shipp Truman,

later President of the United States. 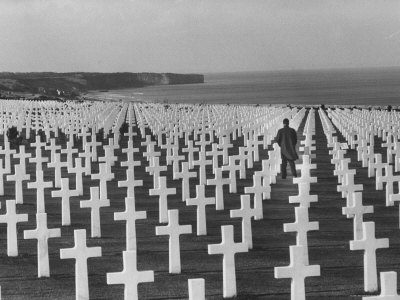 The Operation Overlord, planned by a team under Lieutenant-General Frederick Morgan

who died age 73, on 19-03-1967, in Northwood, was the largest amphibious invasion in world history and was executed by land, sea and air elements under direct Anglo-American command with over 160.000 soldiers landing on 6 June 1944: 73.000 Americans, 61.715 British and 21.400 Canadians. 195.700 Allied naval and merchant navy personnel in over 5.000 ships were also involved. The invasion required the transport of soldiers and materiel from the United Kingdom by troop-laden aircraft and ships, the assault landings, air support, naval interdiction of the English Channel and naval gunfire support. The landings took place along a 50-mile (80 km) stretch of the Normandy coast divided into five sectors: Utah, Omaha, Gold, Juno and Sword.  American casualties at Omaha on D-Day numbered around 5.000 out of 50.000 men, most in the first few hours, while the Germans suffered 1.200 killed, wounded or missing. Franz Gockel a German machinegunner of the 726th Infanterieregiment of the 716th Infanteriedivision, claimed to have shot hundreds of American soldiers of the 116th Infantry Regiment

on Omaha Beach, stationed at his Widerstandnest 62, with his Czech water-cooled MG, machinegun, from WW I, a booty from the Czechian invasion in 1939. 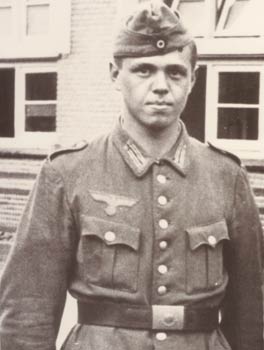 A teenage soldier in the Wehrmacht, Gockel had his 18th birthday while serving as a gunner in a ‘resistance nest’ Nr 62, with 726th Grenadier Regiment, on Omaha beach. He was shot in the hand and evacuated to Paris before serving again and being captured by the Americans. After 18 months in custody he was released and returned to his home town of Hamm, where he set up a roofing company and still lives with his wife. Gockel has made regular trips to Normandy since shortly after the war, and has many friends there. Franz Gockel died age 79, from diabetic, 22-11-2005 in Rhijnern. With General Norman Cota

committed suicide nearby and on to the Elbe river. On occupation duty in Hannover and Recklenhausen and the Coblenz area until July 1945, when control was relinquished to the French.

He retired to his home in Santa Barbara, California with his wife Margaret and lived their until his death on the 09-10-1959 at the age of 70. Paul Baade is buried with his wife Magarete Craig, who died age 80 in 1977, on Arlington Cemetery, Virginia USA, Section 7, almost next to Air Corps Lieutenant General., Head of the American Air Force, Frank Andrews. Close by in Section 7, the first Allied Airborne Army, U.S. 2* Air Force Lieutenant General, Operation “Market Garden”, Louis Brereton, General, Chief of Staff of Sixth Army, George Decker, Brigadier General, Commander U.S. Marine Corps, Lemuel Shepherd Jr. and General, Vice Chief of Staff of the U.S. Army, John Hull