united statesNavyAdmiral
Ashworth, Frederick Lincoln, born 24-01-1911 in Beverly, Massachusetts, was a 1933 graduate of the United States Naval Academy. When the United States entered into World War II, he was assigned to the Manhattan Project and the construction of the atom bomb. He was the weaponeer aboard World War II B-29 “Bock’s Car”, 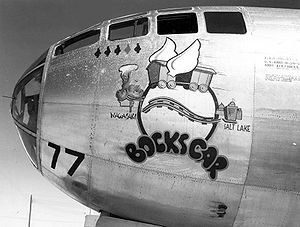 which dropped the atomic bomb on the city of Nagasaki, Japan in August 1945. On the morning of 09-08-1945, three days after the Enola Gay dropped an atomic bomb on Hiroshima (see pilot Paul Tibbets)

, the B 29 super fortress dropped a second bomb on Nagasaki, killing and wounding tens of thousands and leaving much of the city in ruin. Within days of those atomic strikes, Japan surrendered, ending World War II. Kokura in Japan,

was the first target, but the bombardier couldn’t locate it because the area was clouded. So the navigator took them to Nagasaki, a destiny. Admiral Ashworth was awarded the Legion of Merit in 1946 for his work on the atomic bomb project. He commanded the aircraft carrier Franklin Delano Roosevelt in the 1950’s and served as commander of the Sixth Fleet in the Mediterranean in the 1960’s.