Hitler reoccupies the Rhineland in 1936.

Nazi leader Adolf Hitler violates the Treaty of Versailles and the Locarno Pact by sending German military forces into the Rhineland, a demilitarized zone along the Rhine River in western Germany.

The Treaty of Versailles, signed in July 1919–eight months after the guns fell silent in World War I–called for stiff war reparation payments and other punishing peace terms for defeated Germany. Having been forced to sign the treaty, the German delegation to the peace conference indicated its attitude by breaking the ceremonial pen. As dictated by the Treaty of Versailles, Germany’s military forces were reduced to insignificance, 100.000 men and the Rhineland was to be demilitarized.

In 1925, at the conclusion of a European peace conference held in Switzerland, the Locarno Pact was signed, reaffirming the national boundaries decided by the Treaty of Versailles and approving the German entry into the League of Nations. The so-called “spirit of Locarno” symbolized hopes for an era of European peace and goodwill, and by 1930 German Foreign Minister Gustav Stresemann

had negotiated the removal of the last Allied troops in the demilitarized Rhineland. However, just four years later, Adolf Hitler and the Nazi Party seized full power in Germany, promising vengeance against the Allied nations that had forced the Treaty of Versailles on the German people. In 1935, Hitler unilaterally cancelled the military clauses of the treaty and in March 1936 denounced the Locarno Pact and began remilitarizing of the Rhineland.

Some of Hitler’s top Army Generals, as General Ludwig Beck,

had gotten cold feet during the manoeuvre. Only Konstantin von Neurath,

his Foreign Minister, had calmly assured him: “You can risk it. Nothing will happen.” Hitler would never forget the fearful behaviour exhibited by some of his top generals during his first military venture. As a result, their cautious advice would often be ignored in the future.

In the Rhineland, German Army troops marching under the Swastika banner were met by German priests conferring blessings upon them and women tossing flowers into their path. In Cologne, the people went wild with joy. Inside Cologne’s Catholic Cathedral, Cardinal Schulte even praised Hitler for “sending back our Army.”

A few weeks later, on March 29th, a nationwide referendum was held in which 99 percent of the registered voters in Germany went to the polls and gave a 98.8 percent “Ja” vote approving Hitler’s reoccupation of the Rhineland. The Führer had reached new heights of popularity.

Two years later, Nazi Germany burst out of its territories, absorbing Austria and portions of Czechoslovakia. In 1939, Hitler invaded Poland, leading to the outbreak of World War II in Europe. 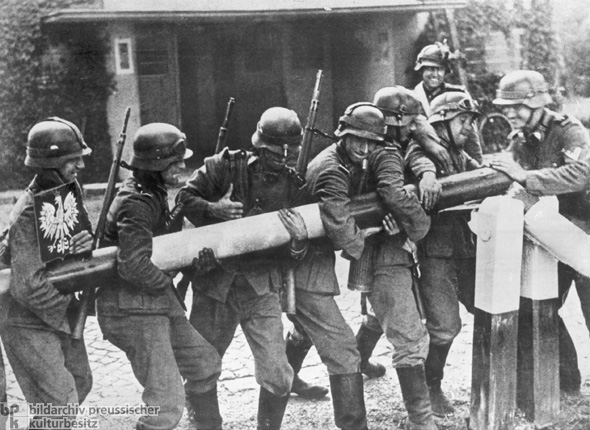 Firebombing of Dresden February 13, 1945.
Elbe Day, April 25, 1945, is the day Soviet and American troops met at the River Elbe, near Torgau in Germany,