Adolf Galland is probably the best-known German fighter pilot. He was born in Westerholt, Westfalen, on 19 March 1912 and in his youth he flew gliders on the heath nearby. In 1932 he started training as an airline pilot, but in those days the Germans were secretly building an air force (under the Peace Treaty of Versailles Germany was not allowed to have an air force) and in 1933 Galland was sent to Italy to receive military training there. In 1937 he joined the Condor Legion

, a German volunteer force that was sent to Spain to support the forces of Francisco Franco in the Spanish Civil War. At the start of World War II in 1939 he flew many sorties over Poland and was decorated with the Iron Cross, Second Class.

Next was the Battle of France, which started in May 1940. Galland shot down several British and French aircraft, was promoted to the rank of Major and received the Knight’s Cross. In the following Battle of Britain Galland led Gruppe III of Jagdgeschwader 26 “Schlageter”

. He scored his 40th victory on 24 September and was decorated with the Oak Leaves to the Knight’s Cross, but the battle ended badly for the Luftwaffe, which lost many pilots and aircraft.

After the death of Werner Mölders i

n November 1941 he was appointed General der Jagdflieger (General of the Fighter Arm). In January 1945 he was relieved from this post and given the task of forming JV 44, a squadron of fighter aces, like Johannes “Macky” Steinhoff

flying the Me 262 jet fighter. He flew until the end of the war and his final score was 104 victories, having also won the Swords (21 June 1941) and the Diamonds (28 January 1942) to the Knight’s Cross in the process. After the war he became an adviser to the Argentinian air force (1948-1954). Later he returned to Germany, where he worked as an adviser to several companies in the aviation industry. 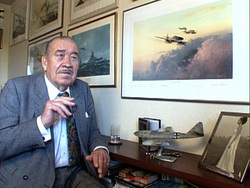 A bon vivant, always smoking a sigar, not afraid of Hitler and who married three times, was buried, age 83 on the cemetery near the St. Laurentius’ Church in Remagen-Oberwinter, close to the famous Remagen Ludendorff Bridge.