The Ludendorff Bridge (sometimes referred to as the Bridge at Remagen) was in early March 1945 one of two remaining bridges across the River Rhine in Germany when it was captured during the Battle of Remagen by United States Army forces during the closing weeks of World War II. Built in World War I to help deliver reinforcements and supplies to the German troops on the Western Front, it connected Remagen on the west bank and the village of Erpel on the eastern side between two hills flanking the river.

under General Courtney Hicks Hodges approached Remagen and were surprised to find that the bridge was still standing. Operation Lumberjack was a military operation with the goal to capture the west bank of the Rhine River. Its capture enabled the U.S. Army to establish a bridgehead on the eastern side of the Rhine. After the U.S. forces captured the bridge, German forces tried to destroy it multiple times until it collapsed on March 17, 1945, ten days after it was captured, killing 28 U.S. Army Engineers. While it stood, 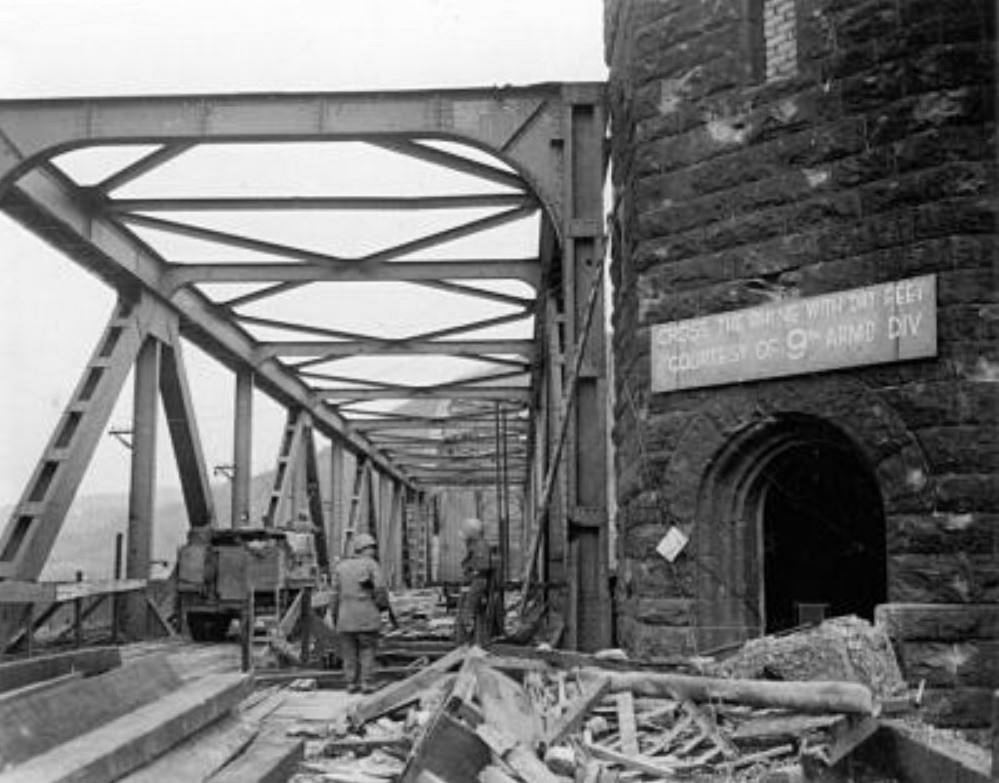 the bridge enabled the U.S. Army to deploy 25,000 troops, six Army divisions, with many tanks, artillery pieces and trucks, across the Rhine. The last commander of the Remagen bridge was Major Hans Scheller

. Within five days the energetic and capable Scheller,  as Hitler censed by the loss of the bridge accused Scheller Scheller would be shot by a firing squad, with 12 other sentenced by a Flying Court in a local restaurant, near Birnbach, 60 miles from the bridge, his wife Lisel was pregnant at the moment.

One of the first to cross the Remagen bridge was sergeant, Alexander Drabik

It was never rebuilt. The towers on the west bank were converted into a museum

and the towers on the east bank are a performing art space.