Was a Polish-Jewish engineer and senator to the prewar Polish Sejm for Nonpartisan Bloc for Cooperation with the Government. Head of the Jewish Council in Warsaw.

to an assimilated Jewish family, was a Polish-Jewish engineer and senator to the prewar Polish Sejm for Nonpartisan Bloc for Cooperation with the Government. He studied engineering at Warsaw’s Polytechnic Institute, industrial engineering in Dresden, and taught in the Jewish community’s vocational school in Warsaw.His Polish was native, his German fluent, and his Yiddish halting. This later hampered his communication with less assimilated, more traditional Yiddish-speaking ghetto inhabitants

and undermined their confidence in him. Czerniakow acquired considerable experience as a communal leader and was known for organizing the Jewish artisans, who constituted some 40% of all Polish Jewry. From 1927 to 1934, he served as a member of the Warsaw Municipal Council and, in, 1931 he was elected to the Polish Senate. Before the outbreak of World War II, he was a member of the Executive Council of the Warsaw Jewish community and served as its vice chairman.On 23-09-1939, the mayor of besieged Warsaw appointed Czerniakow to head the Jewish Community Council; his appointment was confirmed by the German authorities on 03-10-1939, when the 24-member Jewish Council (Judenrat) was constituted on Heydrich’s orders. The Judenrat was responsible for implementing German orders in the Jewish community.
Over 100.000 of the Ghetto’s residents died due to rampant disease or starvation,

as well as random killings, even before the Nazis began massive deportations of the inhabitants from the Ghetto’s Umschlagplatz to the Treblinka extermination camp during the Grossaktion Warschau, under the command of SS Gruppenführer Jürgen Stroop,

part of the countrywide Operation Reinhard ordered by Reinhard Heydrich.

Between Tisha B’Av (July 23) and Yom Kippur (September 21) of 1942, about 254.000 Ghetto residents, or at least 300.000 by different accounts, were sent to Treblinka and murdered there. On 23-07-1951, after a trial lasting three days, a Polish court sentenced Stroop to death by hanging. Stroop was hanged on 06-03-1952, outside the Mokotow prison in Warsaw  Czerniakow committed suicide in the Warsaw Ghetto 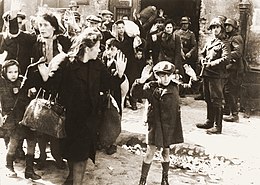 on 23-07-1942 by swallowing a cyanide pill, a day after the commencement of mass extermination of Jews known as the Grossaktion Warsaw. Czerniaków studied engineering and taught in the Jewish community’s vocational school in Warsaw.

From 1927 to 1934 he served as member of the Warsaw Municipal Council, and in 1931 was elected to the Polish Senate. On 04-10-1939, a few days after the city’s surrender to the Nazis, Czerniaków was made head of the 24 member Judenrat, Jewish Council, responsible for implementing Nazi orders in the new Jewish Ghetto. As the German authorities began preparing for mass deportations of Jews from the Warsaw Ghetto to the newly built Treblinka extermination camp in July 1942, the Jewish Council was ordered to provide lists of Jews and maps of their residences. On 22-07-1942, the Judenrat received instructions from the SS that all Warsaw Jews were to be “resettled” to Auschwitz. Exceptions were made for Jews working in Nazi German factories, Jewish hospital staff, members of the Judenrat with their families, members of the Jewish Ghetto Police with their families. SS Hauptsturmführer, Josef Mengele

in Auschwitz, infamous for performing human experiments on camp inmates, including children, for which Mengele was called the “Angel of Death”. Over the course of the day, Czerniaków was able to obtain exemptions for a handful of individuals, including sanitation workers, husbands of women working in factories, and some vocational students. He was not, however, despite all his pleading, able to obtain an exemption for orphans from the Janusz Korczaks orphanage. The orders further stated that the deportations would begin immediately at the rate of 6.000 people per day, to be supplied by the Judenrat and rounded up by the Jewish Ghetto Police. Failure to comply would result in immediate execution of some one hundred hostages, including employees of the Judenrat and Czerniaków’s own wife. Realizing that deportation meant death, Czerniaków went to plead for the orphans. 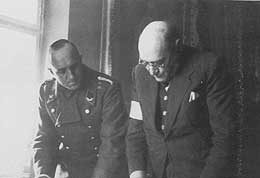 When he failed, he returned to his office and took one of the cyanide capsules he had been keeping for just such an occasion. He left a suicide note to his wife, reading “They demand me to kill children of my nation with my own hands. I have nothing to do but to die,” and one to his fellow members of the Judenrat, explaining: “I can no longer bear all this. My act will prove to everyone what is the right thing to do.” Czerniaków kept a diary from 06-09-1939, until the day of his death. It was published in 1979 and has been translated into English. His wife, Niunia, survived the war and preserved his diaries; their only son, Jas, fled to Soviet territory, but did not survive the war. Adam Czerniaków is buried on the Okopowa Street Jewish Cemetery in Warsaw.