A Few of The Many Assassination Attempts on Adolf Hitler.

While Adolf Hitler garnered much approval in his early days of leadership, many Germans soon began to see the folly of keeping such a man in power. As such, more than fifteen assassination attempts were made on his life. A few of these are more notable than others, but they all share one thing in common—they all failed. Adolf Hitler did not die until the die he took his own life while hiding in his bunker.

The first assassination attempt was made relatively early on. On November 9, 1939, a German carpenter named Johann Georg Elser 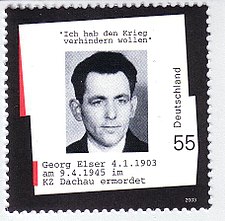 placed a bomb behind a pillar not far from where the Führer was to be giving a speech among members of his Old Guard. The bomb killed eight people and wounded sixty, but Adolf Hitler was not among them. He had begun his speech early that night due to fog, and had vacated the area quickly afterward. He was making his way back to the train station just minutes before the bomb was set to explode. Elser was eventually caught, having already been arrested for trying to escape into Switzerland. It was only a short time before they discovered his involvement.

One of the most famous attempts is that which was carried out by Lieutenant Colonel Claus von Stauffenberg.

He had fixed a bomb in a briefcase and placed it directly under a table at which Adolf Hitler would be sitting during a meeting at his Prussian headquarters. The bomb was pushed further under the table, and the Führer managed to survive. Stauffenberg and others involved were subsequently captured and killed.

Some of the lesser-known assassination attempts hardly managed to gain speed before they failed. Captain Eberhard von Breitenbuch

failed to shoot the Führer at a 1944 conference because his rank did not give him access. Adolf Hitler might have been killed by a bomb placed in an army overcoat by infantry captain Axel von Dem Bussche

, but the army’s uniforms were destroyed by an air raid. A similar attempt failed for similar reasons, when an air raid resulted in another public demonstration being cancelled, the Express reports. Von Breitenbach survived the war and died age 70 on 21-09-1980 in Göttingen.

After becoming close friends with leading Army Group Center conspirator Colonel Henning von Tresckow, von Gersdorff agreed to join the conspiracy to kill Adolf Hitler. After von Tresckow’s elaborate plan to assassinate Hitler on 13 March 1943 failed, Rudolf Freiherr von Gersdorff declared himself ready to give his life for Germany’s sake in an assassination attempt that would entail his own death.

On 21 March 1943, Hitler visited the Zeughaus Berlin, the old armory on Unter der Linden, to inspect captured Soviet weapons. A group of top Nazi and leading military officials were present as well. As an expert, von Gersdorff was to guide Hitler on a tour of the exhibition.

Moments after Hitler entered the museum, von Gersdorff set off two ten-minute delayed fuses on explosive devices hidden in his coat pockets. His plan was to throw himself around Hitler in a death embrace that would blow them both up. A detailed plan for a coup d’état had been worked out and was ready to go; but, contrary to expectations, Hitler raced through the museum in less than ten minutes. After he had left the building, von Gersdorff was able to defuse the devices in a public bathroom “at the last second.” After the attempt, von Gersdorff was immediately transferred back to the Eastern Front where he managed to evade suspicion.

Prior to the 20 July plot, von Gersdorff also had hidden the explosives and fuses that another conspirator, Wessel von Freytag-Loringhoven, managed to procure from the Abwehr’s cache of captured British weapons and which von Stauffenberg was to use in his attempt to kill Hitler. Thanks to the silence of his imprisoned and tortured co-conspirators, von Gersdorff was able to escape arrest and certain execution.

Adolf Hitler believed that he had a higher power watching over him, and these numerous failed assassination attempts did nothing to quell his ego. There were multiple shootings, explosives, and rigged accidents that never occurred because of reinforced security, malfunctioning detonators, and other factors. In many cases, the problem was that Adolf Hitler simply did not show up. In some ways, it might have been better that he survived. One plan backed by Winston Churchill was actually planned because the British believed Adolf Hitler to be a poor strategist, and did not want him replaced by someone more competent.

Elena Rzhevskaya was tasked with a bizarre job: protecting a jewelry box containing the only irrefutable proof of Hitler’s death.