Nürnberg Rally, Nürnberger Parteitage, any of the massive Nazi Party rallies held in 1923, 1927, and 1929 and annually from 1933 through 1938 in Nuremberg in Bavaria. The rallies were primarily propaganda events, carefully staged to reinforce party enthusiasm and to showcase the power of National Socialism to the rest of Germany and the world.

The first nationwide party convention was held in Munich in January 1923, but in September of the same year the site was moved to Nuremberg, whose quaint medieval character provided an ideal backdrop for the nationalistic pageantry of the second party congress. The first truly grand-scale rally occurred in 1929 and featured most of the elements that marked all future rallies: blaring Wagnerian overtures, stirring martial songs, banners, goose-step marches, human swastika formations, torchlight processions, bonfires, and magnificent fireworks displays. Adolf Hitler and other Nazi leaders delivered lengthy orations. Buildings were festooned with enormous flags and Nazi insignia. The climax of the rallies was the solemn consecration of the colours, in which new flags were touched to the  Blood Banner

, a tattered standard said to have been steeped in the blood of those killed in Hitler’s abortive Beer Hall Putsch of November 8–9, 1923.

The rallies usually were held in late August or September, lasted several days to a week, and drew hundreds of thousands of Party members and spectators, including hundreds of foreign journalists. The rallies included rousing speeches by the Führer that were often the occasion for the announcement of new Nazi directions. For example, in 1935 the racist Nuremberg Laws were promulgated against the Jews. 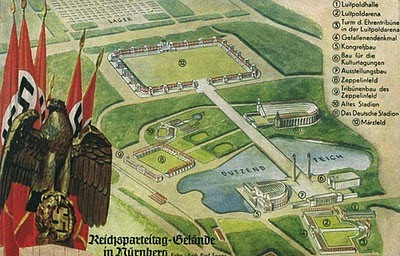 1st Provisional Marine Brigade in the Battle for Guam.

A Few of The Many Assassination Attempts on Adolf Hitler.
Wilhelm Brasse the "famous photographer of Auschwitz".