The Home Guard was originally known as the Local Defence Volunteers, LDV. This was considered too much of a title and it became the Home Guard, though the nickname ‘Look, Duck and Vanish’ did stick – rather unfairly as the work done by the Home Guard was very important.

But it appears the real truth about the Home Guard is very different, and this Dad’s Army was very much a Lads’ Army during the Second World War 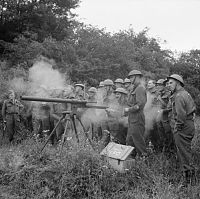 New documents released by the National Archive today give us the most detailed picture ever of who joined the world famous volunteer force between 1940 and 1945.

By sifting through application forms and using a representative sample of these people, experts have found that half of these four million or so British soldiers were under 27, and a third were under 18.

The Home Guard had a number of purposes. They made those in it feel as if they were doing something constructive in the war effort. The Home Guard was not simply for older men past conscription age. Those young enough to be conscripted but who did not pass the military’s medicals could join the Home Guard. Men between 17 and 65 years could join it. The government had expected 150,000 volunteers in total but within 24 hours of Anthony Eden’s radio broadcast, 250,000 had joined. By August 1940, over 1.5 million men had volunteered.

The Many Assassination Attempts on Adolf Hitler

Why Dutchies love the Canadians.
The Bloody Battle for Iwo Jima.