Shameful secret of the Nazi camp guard who married a Jew.

Ravensbrück was the Nazi’s largest concentration camp for women. There, 132,000 women and children, and 20,000 men were imprisoned. In 1945, when Rinkel worked there, thousands of prisoners were killed on the orders of the SS in the gas chambers. In the 1950s, Rinkel moved to the United States, where she met her future husband Fred Rinkel. He, ironically, was an escaped Jew from Germany. It is believed that he had never discovered his wife’s history. Eventually, the Office of Special Investigations uncovered her whereabouts, and approached her on 4 October 2004. Rinkel confessed to having worked in the Ravensbruck concentration camp, as a voluntary dog handler: This activity was better paid than the ordinary work of supervisors.
Fred Rinkel, a German-born Jew, died in January 2004 of a heart attack. His funeral was held at Sinai Memorial Chapel and he is buried at Colma’s Eternal Home Cemetery, a Jewish institution. Prior to her deportation, Elfriede Rinkel had planned to be interred next to her husband. , and that she did not join the Nazi party. However, other information contradicts this: “One prisoner reported that women were even worse than men in commanding their dogs to brutally attack inmates.”. They claimed to have always behaved correctly. Insa Eschebach, a historian and the director of the Museum of the Ravensbrück concentration camp, deems a protective claim. Dogs were used in the concentration camps as a weapon that could be used recklessly. Some guards let the animals go on prisoners, which they, with sometimes fatal consequence, inflicted severe bite wounds all over his body. Since other crimes are barred, the Central Office of the State Justice Administration for the Investigation of National Socialist Crimes in Ludwigsburg is currently examining only whether it is possible to prove the murder at Elfriede Rinkel murder or aid. If this can be proved, it risks a life sentence. Also, the Simon Wiesenthal Center in Jerusalem insists on a trial.

She left Germany for the United States and was admitted as an immigrant on or around September 21, 1959 in San Fransico, California. At a German-American club in San Francisco she met Fred William Rinkel and they married about 1962. Rinkel stated she never told her husband of her past.

On September 1, 2006, Elfriede Rinkel was deported to Germany under a settlement agreement signed in June 2006 after being charged by a federal law requiring removal of aliens who took part in acts of Nazi-sponsored persecution filed by the Justice Department’s Office of Special Investigations (OSI) and the United States Department of Homeland Security’s Immigration and Customs Enforcement (ICE).The German authorities were informed by the American authorities after the departure of Rinkel. She spent some time on a farm in the Rhineland with relatives, then she presumably traveled to Switzerland where she presumably lives. Kurt Schrimm from the Central Office of the State Justice Administrations for the Investigation of National Socialist Crimes says her files were given to the prosecutor in Cologne. 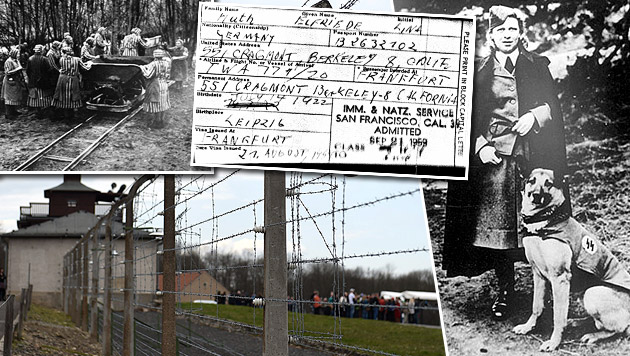 Elbe Day, April 25, 1945, is the day Soviet and American troops met at the River Elbe, near Torgau in Germany,

The Horror of the Lwów Ghetto, Lemberg.